PDF I have being meaning to write up reviews for various stuff forever and I keep putting it off because it requires careful articulation and what-not rather than just punching the computer in its keyboard with my imagination until quality happens.
First up:
The 52 page rule book from here:

This is good. I totally used it to run a game for 5 new people and it went smoothly.

Especially like how "robust" it is, like you can easily pull off bits and stick new bits on.
Having all the classes modifiers and abilities in one table (okay 2 tables if you include the skills), means that 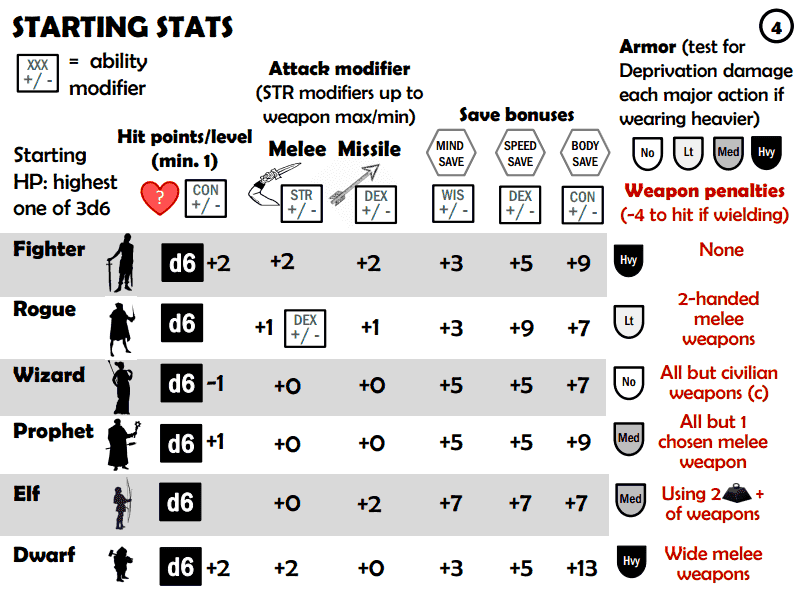 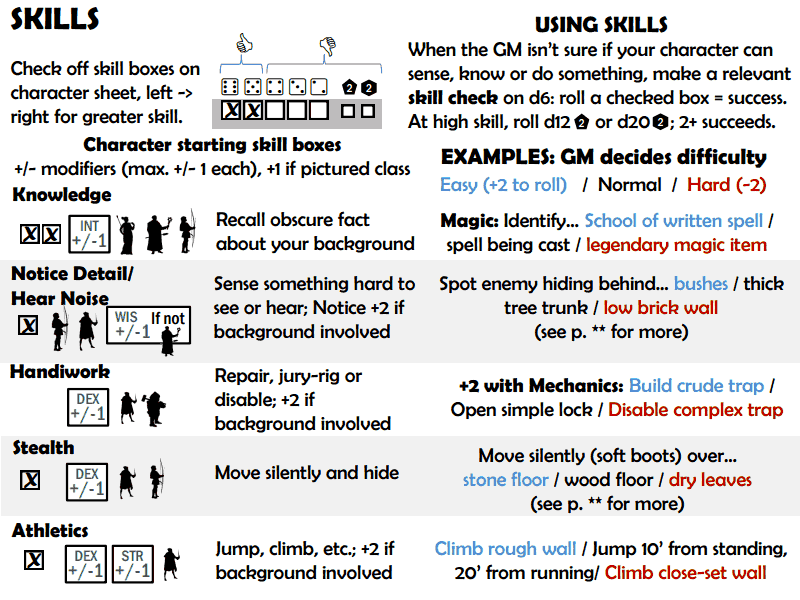 ..it is easy to go "my campaign has lizard-people" and then scribble lizard people's mods underneath dwarf, or just cross something out. It's all there for easy comparison and feels wonderfully modular.
Also look it's all the numbers you need on one damn table.

Having skills being like "shit you will need to do in a dungeon" and then listing how good various class and races are at them, is a great "what this game will be about dial".
Like, planning a Shamans and Sabretooths game? have the skills be Tracking, Making shit out of animals, Spirit wrangling, Sneakiness and Cannibalism. A Laser Dinosaur Planet game? Jury Rig, Implausible jumping , Pilot, Dinosaur wrangling,Psychicness.

Note I'm not saying just reskinning but replacing the skills with the things you think will most happen in your game that otherwise would not be covered by the attributes or class abilities. Well class abilities is always going to overlap with skills in regards to the thief but yeah.

The other couple of times that I got thrown by stuff in here is that I just assumed things would work one way and didn't bother to check.
So the skills  have a maximum amount that they can modified by an attribute bonus and weapons have a maximum they can be modified by strength.
Didn't notice this when I read through the system before play , and while it seems to work in a gameist  way, (ie skills don't become maxed out too earlier, weapons have different advantages) I found it slowed down things to explain it to the players (mainly because I had just realized it was there when character creation happened).
I think I didn't wind up using the capped attribute rule and planned to use something like this
when / if people got to a level in which it would matter.
I.e you get a skill past rolling 5 or less on a d6 you start rolling a second d6 .  Starting at succeeding at 1 , a success with this other d6 means you either get a reroll on the first d6 or a bonus-happening to you skill check, so an athletic check could be done with surprising silence or uncanny speed or something.

My only quibble is about some of the weapons , like a long sword can be used Close (in a brawl) but not a club, and hand axes can be used in a narrow environment but not clubs. Which is weird because police batons are used in narrow formation and the port arms grip allows a club (or an axe) to used effectively in close and if you have room to swing an axe you definitely have room to swing a club.  I'm quibblingly pettily here though. OTHER QUIBBLES
if you are cheap and print in black and white you will have the dickens of a time telling what is labelled with a copper coin and what is labelled with a silver or gold coin with the inventory.

"Class depends on what highest ability is , choose if tied"  Um.. No. Look if I have convinced someone to actually play d&d with me , I'm not going to immediately bust their junk saying they can't play a wizard they have to play a fighter. I don't care if they rolled a 7 for intelligence for their wizard. That's some character development shit right there.

Other strong points include the spell cards (print and cut out cards with the spell descriptions on them) and numerous little "oh that's a nice way of doing that" that are numerous beyond my concentration to list them.
IN CONCLUSION:
If you wanna run a game of d&d and don't have any books handy or just don't want to have to carry them, this is everything you need. Seriously. Also extremely good as a base system for building your house rules on. Or as a source of a handy add on if you wanted something tidy for , say,  Encounters, Morale, Treasure, Monster Templates, Brawling, Climbing on Giants , Equipment lists, Injuries, Traps, Critical Hits, or Chases.
Comprehensive yet concise.  Did I say that already?
DISCLAIMER:
I never used the prophets because pfft clerics. Also I mistook "Handiwork" for "sleight of hand" and thought it was cool that dwarves were naturally good at it. Or in this case Catfish.

Email ThisBlogThis!Share to TwitterShare to FacebookShare to Pinterest
Labels: 52 page rule book, dungeons and dragons lite, other peoples stuff, review, use this thing