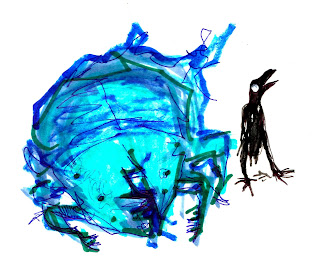 More hooks from and for Fire On The Velvet Horizon

Atrocious Crows:
Walking birds with a depressive call,  capable of scouring humanity from the inflicted and leaving only amoral marauders.

Hooks that are pretty much in the text already:
1Their feathers "eat" light, valuable to make into exceptional thieves cloak , shield and contain objects of dangerous radiance
2.In the darkest cells of the royal dungeon , is a circular pit lined with Atrocious Crow cages. Spies, conspirators to regicide, and holders of the old faith are sentenced  to  being lowered down into this pit for a precise amount of time; enough to experience despair  but not long enough to become an Atrous-man
3. A land has become lost , blustering villages and tight knit towns have become empty , home only to the passing bands of atrous-men.
4. (hex filler) A lone very tall , very hallow pine, with a dozen atrous men living  inside it, surrounded by a mire* of Atrocious crows. One used to be a legendary sage who knows things no other knows. But which and how to get him to willing to recall the knowledge?
5. (hex filler) The sound of manically rung church bell and loud festive music can be followed to reveal wedding under siege by Atrocious Crows, lead by multiple Empty-Men. While some of the wedding party are now catatonic and huddled under tables, the majority have holed up inside the church. They have  boarded up the windows and doors, and are drowning out the caws by ringing the bell and playing festive music as loud as they can. For now they are managing to keep it up, having had to improvise several instruments broken from the extended playing, but it is unlikely they will outlast the bitter patience of the Empty Men
Greatly Expanded Upon
6.The Atrous-men command the Crows with language unknown to all but dismissed as mere noise. However rare samples of a written form of it exist. Further more records of a collapsed ancient empire refer to a book written in this language, and the book was seen as valuable enough to ruin this empire in the attempt to obtain it.

*the collective noun of Atrocious Crows is a "Mire"

Azul:
Blazing bugs carried to earth on thunderbolt, doomed to die unless they can once again climb skyward.

Hooks that are pretty much in the text already:
1.Clouds are hives for Azul. And like bee hives, there's a honey "Phlogiston". It's extreme dangerous, unstable , and somewhat counter-intuitively, valuable
2.<encounter> A frantic Azul chasing a storm , leaving a burning swathe behind it
3. If you need to get a sky-palace , storm fortress, or cloud garden the least feasible and practical  way is to find a downed Azul, wait until its latched onto a lightning bolt, and ride it , as it rides itself, back into the sky. However such a dangerous and nigh inconceivable plan has one thing for it, who would think to guard against such a fool's quest?
4. "Its ghostly organs are worth incalculable sums" The containment measures to keep it fresh and puissant are also a considerable amount  , but what interests us today is the damage  unleashed if they are tampered, and the gathered auction crowd present who would be subject to their damage, and that's about where the job offer begins to your p.cs
5. The lives of the storm and the Azul are linked. If an Azul can be captured and maintained beyond its own to do ,  then its storm will also be maintained. A storm that does not end can become a significant problem.
Original content please use
6."Perhaps as the Azul lives in the air, once long ago its ancestors swarm within the earth and stone." Well turns out those weird rock echoes of the Azul aren't  its ancestors, they are its parallels in stone rather than sky. And while the Azul moves at a lightning pace, these earthen brethren , move at geologic pace. A matter of mere academic interest?
Well it would be but a particular academic , whose particular unhinged, happens to be investigating what happens if you cast a lot of haste spells on one. Other more reasonable minds are very concerned about this , and are looking for a rag-tag band of resourceful individuals to find him before some new mountain ranges start popping up.