Lo! I used that generator to generate the bones and now
to pour on the glistening idea meat:

Deceptionists "adopt" weird  oversized insect ghosts, secreting the astral pheromones that manipulate their adopted bug children into tools. Mostly these "tools" are used to enhance or interfere with other beings biology.

To be able to see these WOIG the decptionist has astral perception and aura sight. 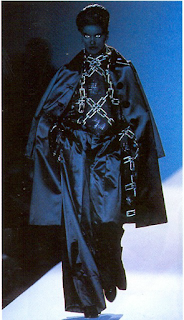 The 5th wind is a wind that blows only ill. Hence this Wind was not assigned a compass direction. Lacking this conventional wind way of influencing and shaping the world, the Ill-Wind gives out its winds to the Zephyr; outcasts and fringe dwellers. These people lacked any other way of getting power, and so now have self-sewn bags of Trouble winds. These winds cause fumbles, bad luck, confusion, nausea, rage, inflammation, breakage, deafness, and the rarer winds given to the Zephyr most favoured by the Ill-Wind will desiccate, haemorrhage, and flay.

After the stars dies their essence spreads out into the black fine emptiness that holds the worlds. This emptiness echoes with the memories of the stars.
On moonless nights people respectively stay inside, as not to catch weird stray thoughts from alien worlds.
The night-fishers, condemned as "ghouls", disregard this taboo , and catch everything they can with their parabolic masks.
In order to protect their maligned ways the Ghouls have weaponized the "waste products" of their feeding, the scouring emptiness and starry apoptosis mechanisms.

Not waiting for the slow pains of natural selection , they somehow reach into a space of possibility, flaring their bodies potential to be something Else.

Secondary, their ethos of finding strange paths and niche survival means they are resourceful and painstaking with their material possessions