PDF Patrick has shed light on the dark workings of hell and given us a better monster for the term "deodand" than the original Monster Manual 2 ever did.

It opens up a whole subsection worth of living machines, cursed swords , and wacky flintstones domestic-objects-as-fully-sentient-tormented-devices.


Before  we begin, the mercantile purpose of this post series, i.e the promotion of the Deep Carbon Observatory Kickstarter , will rear its head.
Here's the link, note that we have a new stretch goal, one in which we pay Brendan Strejcek (of Necropraxis fame to make all the spells contained in Deep Carbon Observatory "level-less" in the style of Wonder & Wickedness (which he wrote).
All spells being both the classic d&d ones and the ones newly featured.
If this stretch goal is reached , these spells will put in a freely accessible pdf (but not included in the book as that would throw out all the layout and shipping weight calculations)


right, with that the gild serpent of capital gain  slinks from view, we can begin your mild entertainment :

The naga sunset court who rules when the sky is the assigned shade is headed by the Princess Never-Moon.

Born marked with the sorcerer crimes of her mother , her scales thin enough to be pierced with hair, her hearing as vulnerable too  .

A heartbeat at a distance sounds like the blow of a smiths hammer, a partial exhalation like the hurricanes gale.

Her attendants therefore are necromantic creations and clad in the lightest and softest fabrics.

The naga who volunteer for this fate tend to be those who have loyalty more than intelligence or personal ambition , or those who have disgraced their families and see no other way of earning back status for them.

To be come an Enurnean Attendant the naga is drugged into immobility and lower into water to which numerous flowers , herbs and fragrant tree saps are added.
These are chosen to numb the nerves, soften the skin and flesh, stupefy the mind, strengthen the spirit, and additionally strong preservative agents
Then this bath is slowly brought to boil all the while the naga is kept on the brink of death and sleep.
The nagas flesh will be boiled and soften and fall off their bones, all the while the soul is kept in such a clouded state it doesn't realize the body has cease to function.
The end result is a fragrant skeleton naga, however a slight addled one, like one of an advanced age.

Enurnean Attendants are not the best of servants , their temperaments being either zealous and stupid, or bitter and sullen.
The Princess Never-Moon has taken to giving them masks so she can better keep track of the ones less suited to complicated tasks or ones where their loyalty to the court over her could cause problems.

This one picture is assigned bodyguard duty, (which the "zealous but stupid" is better match for) , equipped with bone-needle fans tipped with paralytic agents.

These weapons are designed to make no noise as they enter flesh , and the paralytic venoms will prevent a noisy (and thus painful to the Princess) death.

Bodyguards such equipped tend to react to loud noise by silencing the cause as quickly as they can, without waiting for the Princesses word otherwise.
This has caused more than a few diplomatic incidents.

Now Patrick, what pray tell is this? 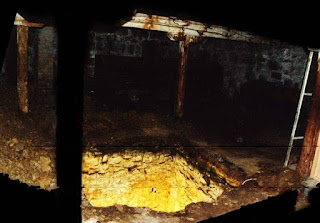 IT WAS AN INTRIGUING MYSTERY
Posted by scrap princess at 02:58