Apologies for the long delay, just been problem after problem.

introducing the realm and then a link to a google drive document.

and converting tables from drive to blogger is always a headache.

my younger tone and mechanical choices. In the end I removed more than I added,

but you can find the original text here: 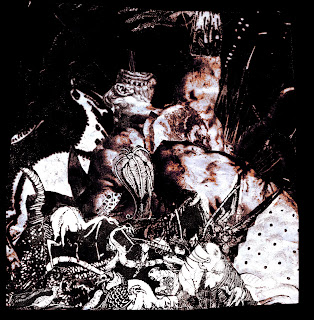 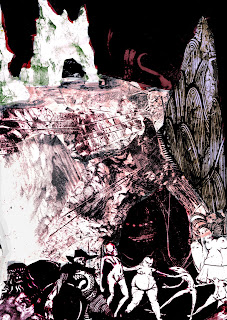 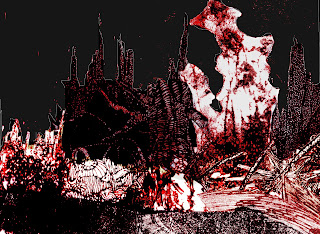 BOUNDLESS RIFTS OF FLESH (The Flesh Rifts, the abyss)

The Flesh Rifts are about desire, cruelty, lust and hunger, all without limits or restraint . It draws to itself

souls who craved their own gratification over the consideration of anything else. Marauders, sadists,

and the truly degenerate all come here. Most Souls end up in the Depths of Pleasure and Pain,

plateau in the approximate middle of the Flesh Rifts.

The majority quickly lose their own concept of self, and are absorbed into the essence of the plane.

The particularly strong of spirit are shaped into demons.

The Depths has a massive hedge of Desire Thorns, to strip the Salt of any Soul even before they lose themselves

, ravines, plateaus, and obscene rock formations, the top of which is frequently covered in garish broiling mists .

Visibility is extremely limited even if you can find the rare path that does not wind through the Canyons.

If the mist is clear, you can see what appears to be clouds and stars. These are actually the war debris of The Grind.

Generating Terrain in The Flesh Rifts

3 | Recent repairs and/or tortures seemingly done to the landscape itself. Rock banks with infected

stitches, trees bandaged to rocks, patchwork terrain with pins holding it together.

4 | Indistinct orifices wetly openly around the PCs, some with pulsing red folds, others barbed thorns

9 | Vile acts of fornication in a lake of blood

then bursts into flames from the landscape

8 | The size of elephant

7 | Armour plates nailed into the skin

8 | Something like a t-rex but made of human bodies

14 | Unto a womb, inverting itself over and over

17 | Low torso or random limb is a long python body

18 | Bathed in a soft golden light

19 | A stunning specimen of humanity

6 | Shifts back and forth

2 | Bat (but with papyrus instead of skin, and writing of drooling idiocy

21 | Floating window looking unto a scene of beauty from the viewer's life, with the duke standing in

23 | Nailed to some kind of torture wheel, rack, or cross

24 | Sewed together, stuffed with bugs

27 | Unnaturally detailed, eye can see more detail than it should, gives feeling that you are too close to the duke at all times

28 | Bloated to proportions suiting a balloon or dirigible.

30 | Roll twice more on this table

5 | Near berserk with rage

17 | Still, then maniac and accusatory, then still

2 | Is carried everywhere by headless musclemen

3 | Flowers grow where ever they step

5 | Knowledgeable about vast range of topics, chatty, asking how things are at home. Any kids? It loves kids

6 | Floats slightly off the ground

2 | Mini-me version of itself

10 | Centipede with a smirk and cruel eyes

10 | Voice is heard inside character's head

15 | Seated on a throne which is motile from its:

17 | Consults a red leather notebook all the time

18 | Smokes an ornate spiralling pipe of bronze and bone

2 | The worst thing ever

4 | Constantly changing depending on mood

7 | Can shrink and climb inside people to possess them

8 | Bites / tears off limbs and can stick them to its own body, getting an extra attack with half your attack bonus

9 | Curse. once on each person can name something that will happen to them no matter once in the next year. Takes a round to announce

11 | Immune to whatever type of damage it was attacked with last round, for this round

13 | Uses a giant's arm as a club. Arms still alive and can grab and crush people

15 | If successfully grapples, assimilate you into its flesh

16 | Regenerates like a troll as long as it inflicts pain

17 | Petrification as a kiss. Stoned character will be animated under its control

6 | Invited for tea / dinner / games / art exhibition. The more pleasant it sounds the worse it probably is going to be .

2 | Is the size of a dollhouse. Is actually a dollhouse. Most likely uninhabited, or roll again and it's solid all the way through.

. Inside is imprisoned something appropriately horrible (12 HD at least). It's layout is:

3 | A maze in 4 dimensions (as above, but when you enter a room, 50% chance of entering an old version of that room,

i.e. everything is undecayed)

4 | One big room, with a prisoner attached to a torture machine of unusual size

4 | 1d4 stories, 1d4 rooms a story. 30% of which are inhabited. Is a resupply point for demonic travellers.

Purpose is some kind of "summerhouse" for a duke

70% chance of being inhabited by one minor or 1d6 lesser demons. One top is mounted a…

2 | Roll on the previous entry but it's also a weapon

4 | Roll on the cauldron entry, previously

5 | Spinning tops the size of horses that shoot fire as they spin around, then explode

8 | A fortress. 1d10 Dukes in residence, and a 10% chance of a demon prince visiting plus an army or two of demons.

6d6 stories, each story has 1d10 rooms. Assume 2d6 guard towers (as result 3) as part of its construction

7 | Hovers a couple of feet above ground

5 | Sitting atop an evil black cloud

cancels the magic. Otherwise, flight ability is built into the walls itself.

9 | Dying captives impaled on spikes and hooks on the walls

is currently in air, river is a waterfall

12 | Gravity is oriented to nearest surface around and in citadel. Outside walls are effected with grease

15 | Currently under siege, by (roll on "Who's Involved?" table above)

17 | Pulsing, glowing lights slither around. Discharges weird magics. 10% chance per round if within

18 | Living, sessile. Strong but not complete resemblance to:

2 | As 1, but like a vast amount of regular-sized legs

6 | It's mounted on a tongue carpet

but with a touch of:

10 | Wind up monkey with cymbals

Some Items Of Note

Emetic whip: an emetic whip is a cured semi-living stomach inverted around a section of its large

intestine. The other end of the intestine is held, and as the whip is snapped the stomach turns back

inwards, releasing its contents in a 1-10 foot arc (depending on the size of the stomach).

The contents, in addition to virulent acid can include poisons, diseases, and dire tapeworms.

The stomach will reload its acid load in about an hour if "fed."

Envious sallet: this is a specially-treated skinned face of someone who hated you.

The hate for you has infused it, and if it sees anyone appearing to attack you,

it will involuntarily alert you with the feelings of envy that pulse out of it,

for it longs to be the one to kill you.

Worm spear: these are spears with the shaft that of a more-or-less rigid worm.

By squeezing the worm, the spear becomes thin and lengthens to form a pike.

By pulling the shaft together it will shorten and fatten and so become a short spear.

Damage by weapon or power

People just pumping weird juices in them to hypertrophy in fucked up ways.

6: Spend a round absorbing recently dead meat to heal themselves 1d4 per hitdice. Inflicting damage on them ruins negates the ability/ 1d6 per hit dice and can increae above 15 maxium

7. Super pus , become puffy , reduce damage from impact / pus is boiling hot and shoot out from injury to slashing / piercing

8. Bone whip , dislocate arm or leg and thrash it into people the bones breaking and multiple and judding out. \can be used like grappling hook/ Limb spilts like the mythical hydra upon recieving damage or delivering max damage

9 Over charge : haste that does damage to user when fail to damage things , steam , fluid and boiling blood leak from meat head. / ?

11 Nerve Wrap : Extend Nerves and tendons into weapon , armour or other equipment. Have to hack it off to disarm it. Reroll lowest damage rolls/ ignore lowest