PDF WELL THAT WAS DARK

Well that was Patrick's response to a dark image , so reaping what you sow I guess. Though I think the dudes who did the reaping often were traveling specialists?

1. I'll assume if you are reading this blog you are wanting something to take your mind off the global pandemic and already have made use of all the information available to you , etc, and therefore are not assuming I'm being blithe or oblivious by not mentioning it.

2. The image response ping pong post series is an ongoing promotion of the dco reprint kickstarter So there's the link out of habit, but anyone and everyone got other stuff going on right now. 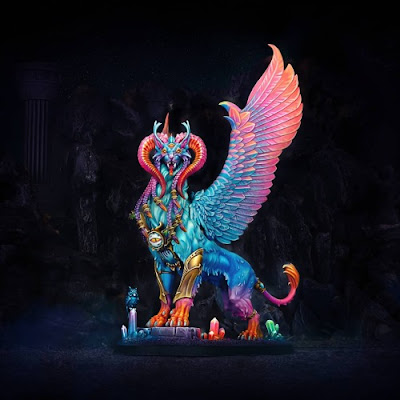 This chimerical and polychromatical creature, what is it ?


It is a Heraldic beast, note the careful and artful framing of the horns , cheek tufts and spurred ears, the single wing, and its innate yet measured posing.

These beasts are more literal heralds than other beast of that title. Sorcerer Knights of New Melniboné create them as living heralds, both in the sense of a coat of arms , and to fly before , to announce their presence giving reasonable warning to their subjects to abase themselves. Subjects that do not make respectful positions , will suffer  the wraith of the Sorcerer Knight , and the torturous fecundity of flesh from a blow from a   Changesome Flails, or a fair worse Khronous Uneasement , which is what will befall those the Knight-Resplendent chooses instead to smite down with their Restless Lance.

The Beasts themselves are mix of impossibility, impracticality and savage actuality. They are so reliant on magic that if one could suppress the incantations that flow in their blood, they would barely be able to breath let only stand .


and now Patrick, for you :