All assumed to have to a Restless-lance, a Changesome Flail and be riding an eel-horse of renown. 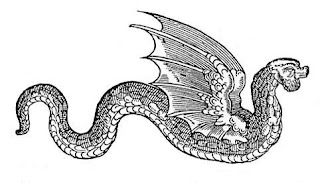 1.Scourfrous Zeal, his herald the Amphitere , its wings envasted ears, its head just lips and a lascivious tongue , its song lovely as its appearence horrid. His armour is bristling field of eyelids and his weapon the stolen tongue of the Dawn Bell

2. Volume's Man, his herald the Calopus, a horned wolf , laterally split entire by its own smile. Its horns make twice its height and festooning with mournful candles. His armour baroque with pearl and sculpted cherub reliefs. He wields a great hoop-net , "gods gullet" , that devours inexorable any caught in it.

3. Burnt Poet, her herald the Leonine Whale, its furred form twisting ever in the air. It murmurs sadly to itself as it swells and declines alternately like a cloud . Her is a libary of burned books, joined with amber. She has the Eventual Moth, a tireless hunter, only real to its victim.

4.Padagoo Grune, his herald a Lympago, its manish form buckled under its own musculature, two dozen failed nations flags atop spears piercing its back. His armour a 1000 years of military fashion , cast in iron and smeared with sooty grease.

5. Kissing Grief, his herald a Stellione,the starlizard weasel, lit from inside  so brightly it hurts to look at it. His armour gold with a corona of blue flame. His weapon a great blade, a single piece of reflective glass that blinds and ensourcens .

6 Providence Jiver, his herald the Wonderful Pig of the Ocean, jovial , rotund , and a bounding.

His armour that of abyssal crabs, his weapon is the alabaster trident , which he caught the pig with.