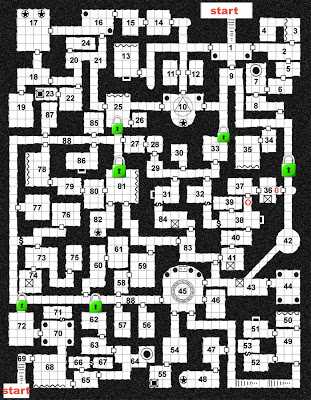 And in the interests of keeping stuff happening here I have done one.
Let's call it:
THE HALLS OF THE BONE WEAVERS

The sound of the huge rat wheel power organ grinder is audible throughout if PCs enter through the north entrance. The ceilings are 9 feet high.

Check for wandering monsters every 3 game minutes or whenever PCs make a lot of noise, roll d10:

2  giggling moth-It is a foot tall & eerily beautiful. It is harmless. If unmolested, it will continue to roam the halls.

3 Fragments of a dazzling squid ink mosaic, very damaged, are here--a landscape with only a pair of white legs ending in hooves are visible so far.

Pieces of the mosaic can be found throughout the dungeon, and will fuse to the wall if placed on the mosaic.

The true form of the mosaic is of Mort the MOrose of the The Bone Weavers on a horse--and assembling it will create a work of art worth PC level x 1000gp, however it is possible to construct false forms by accident or design.

Existing mosaic+ humanoid upper body upper body = a demon. The Hag in 76 will begin calling anyone present to it. Save vs spell.

Existing mosaic+missing front horse legs+human upper body = centaur. Each round, violent madness will be inflicted on whichever party member rolls the lowest on a d20 until they leave the room.

6 Monster in 7 can be heard from here

7 tyrannosaurus hexIt is too large to leave the room. Drinks from well

10 Statue oft the solitary man of tar-vandalized. d6 dead conniving eel s with a war cricket here dead in the center of the triangle, apparently dragged from 25. The triangle will slowly devour them over the course of an hour, at which point the statue will come to life and seek out the Bubbling Hag in room 75.

11 chronomanta inside a  giant rat wheel, which powers an organ grinder

14 As soon as the PCs enter this room the  2 second delay on speech will activate.
A wizard will recognize the effect as a product of a special curse that can be removed on the request of a specific livingmaster (the brain coral infested umberhulk )

15 Kitchen. Pots, pans, the usual. There is a brick oven & a  small pantry closet. A halfling could fit in it.

16 This room is full of the most mundane of maps that the
Brain Coral infested UmberHulk has collected.

The columns here look weak and can be destroyed with 30 pts of damage. The ceiling will cave in.

17 2 identical statues. One made of bone , the other made of squid ink , congealed.

18 There is a zither here worth 2500gp. Playing it for the first time will cause monster in room 7 to break out and crash through the rooms, collapsing the ceilings until it gets to the player.

gnoll upper body mosaic pieces from the mosaic in room 3

20 Hall. 11 small portrait paintings. One of each of glass cat's sisters. They
are worth d20 x 100gp to collectors with unusual tastes

Brain Coral infest Umber hulk. It is hiding under the floor and monitoring the P.Cs through a stupid looking dog that it also has infected

26  bile man is here--it does not speak & obeys the brain coral infested umberhulk. bile man has (as always) hidden a key to room 67 in obsedian fountain

27 There is a cursed bird mask. Any creature inspecting it will be afflicted by a desire to scouredfor 1d4 rounds.

28 Channel of mercury from south ends in a pool here

35  azure crystal formation. Anything azure that touches it will begin to vibrate unnaturally--the object will then reflect magic for one hour and then explode.

36 Walking into this room lowers steel bars where the green O's are and releases monster in 37.

38 Void Witches bedroom. If Void Witchis not in this room the (ordinary) doors will be locked.  Secret door: behind a lantern--a thin crack will be visible. Room contains a make-up table (no mirror, of course), a canopy bed hung with velvet, (d12 x 100) gp worth of other
trinkets. The bed, painting, Void Witch's wardrobe, & the table are each worth (d12 x 100) gp. There is a vase with a explosive spored box trap under the bed containing 600 gp & locket with a small painting of the Void witch

42  Stone walls carved into the shape of vampire squid

44 un aging child in cage. Sibling of Void Witch Gone mad long ago. She may aid the PCs if they convince her they can help her escape the dungeon. She hatesVoid Witch& will make any deal to be reunited with her, but again, will turn on anyone aware of her existence immediately afterward.

45 Anything made of ash placed on the altar will be transformed into squid ink.

46 Texts sacred to religion of the solitary man of tar

47 Puzzle room: wastrel , cook and assassin are sacred to this religion. A magic mask asks 3 questions only members of those professions, respectively, would know. Wrong answers = Power word: implode and it emits a wet hissing

48 Statue of a creature of plasma . An Archpriest of the solitary man of taris here. (PC level x 1000 gp worth of gold flake on statue.)

50 Tombs. d6 Priests of the solitary man of tar

Fragment of mosaic in room 3 showing horse head and humanoid lower body in a saddle.

52 Tomb of  Mort the Morose

53 Mouldering skeleton of hero's traitorous ally Bert the Angry , cloak of the bat

54 d6 fusiler ant guarding sacrifice chamber. They have keys to the cage in room 55.

Apparently a dove headed lamb in a cage. Is actually a rakshasa. It is looking for the tallow ape because it betrayed her.

59 2 dead fusiler ant --one muttering "The gnoll , the gnoll " shattered manacles on the floor.

61  key of undoing being examined by 3 fusiler ant

Room is full of ghost eggs

62 Giant Collecting Silverfish. A pile of its eggs obscure the door to the north. Two tattooed and flayed hides containing membership list of cult are hidden under the pile.

63 Full of teeth collected by a giant collecting silverfish

66 otyugh room.  bile man throws organic waste into this room.. The otyugh covers the entire room, including the wall, obscuring the locked, unpickable secret door there.

68 Murals, int check to read, glyphs and pictograms seem to refer to squid ink and antimatter

69- Empty or stairs to surface/next level

71 Prison Contains d10+10 victims of Void Witch. A variety of sentient species
are represented as well as a few celebrated & high-level missing persons.

72 Door is large, impressive and locked. Picking is at half chance.

75 Bubbling Hag It has been trapped here by a mystic seal on the secret door by the brain coral infested umberhulk and seeks revenge.

76 Clearly a room once built by the The Bone Weavers culture.

78 Disused dreamerless dreams room. Void Witch was having experiments conducted until capture of princess of the earth bound elevator made them unnecessary.

82 Statue of the solitary man of tar

87 princess of the earth bound elevator just escaped, hiding from the assassin in room 78.

88 Walls carved with scenes dedicated to the solitary man of tar depicting members of the following professions: wastrel  cook, assassin -all kneeling

Careful inspection reveals that carving is not wholly original and the figures have been repurposed. There is a great glutton where the secret door to 73-76 is.

Void Witches are witches that worship spirits of the spaces between realitys, horrible clouds of uncollapsed possibilities.

Ruinous Druids are druids that want to kill everything to provide one huge compost for a fungal god mind.

Fist faced Crawling orges are orges with no legs that knuckle drag themselves around and try and grab and crush you with their head hand. They can also flick hard enough to squish organs.

The Boneweavers made everything they thought important out of bone, were obsessed with teeth , and elephant tusks most of all.

A carrion frog is like a desiccated looking frog thing with something of a vulture about its appearance. They eat carrion and almost carrion. Weirdly enough they sing like nightingales. Not so weirdly they smell like someone threw up the same vomit a week later.

Fusilier ants are bipedal ant-people with cannon butts , like a bombardier beetle

Brain Coral is a type of fungus (despite its name) that looks like brainy growth s and makes things smarter but crazy.

Bile-Man is a mutant covered with vile sacks of acidic goo. Like a hunchback but worse.

the solitary man of tar is similar to the black lodge from twin peaks. In that is sinister yet completely obtuse
Posted by scrap princess at 01:35