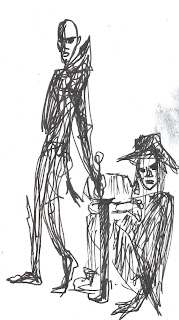 Another back up post topic, the creation ( or highlighting) of hooks to use monster from my favourite dead horse Fire On The Velvet Horizon
Bog Elf:
A Subtle tanninic people, from a mirrored world beneath the still dark waters of the mire .
1. A weapon of a hero , who united the warring tribes , was lost when he and his retinue were betrayed in dastardly swamp ambush. But lately a description of that very weapon was told of , in the hands of a weird knight. He and his fellows were sighted making war on the Potempkimen , a campaign that seems to be continue still.  (pretty much in the text)
2.  Speaking of which , if ever one needed an ally against those sneaky bastards the Potempkimen, the Bog Elf are committed adversary, if you can show them a flair for subtle and convoluted scheming  (pretty much in the text)
3. Liquid Shadow is a valuable substance , and the Bog Elves will trade it for metal goods . The trick is finding them , making contact , and getting their trust, then sourcing metal objects to their liking. As their tastes and needs can seem inexplicable. (pretty much in the text)
4.A very favoured ally of the Bog Elves maybe granted access to the shadow realm , of whose borders seep into those of the Elves. They will only lower such an explorer temporarily in the realm. If such an explorer wished to stay longer and cut themselves lose (and elude their guard) the Bog Elves would have to take on a visitor from the shadow realm of equal size and shape to the astray explorer , and this they do not want.
5.One of the alternatives the Bog Elves use in place of metal is ages-wood. This is wood that has spend a number of ages in the bogs, hardened by tannin and the weight of history.  Each age that has past leaves a different mark on the , and will be named either for the age it has spent in dark or the number.
So Fire-age-wood or 4-ages wood. Such wood can make weapons more than equal of any metal weapon and by being not metal they often have a use in cheating curses or piercing wards
6. A procession of bog elves has come before a king wanting a crime addressed. One of their princes has seen a princess and had his heart stolen. Therefore they want a heart of equal quality in return . It is unclear if they want it as a metaphor or literal.
Swamp Drunks
Those who can navigate the mysterious and maddening Melanic Moors, by being near mad themselves
1. The most obvious hook, the players wish to hire a guide through the Melanic Moors. The trick is sifting through the human wreckage in the outer reachs of Jukai to find someone who truely knows their way through the Melanic Moors , and isn't just a lush wanting to have someone buy them drinks while they lead them in a circle. (pretty much in the text)
2. Stories about certain parts of the Melanic Moors are only accessible to exactingly specific kinds of intoxication, and certain brewers recipes are effectively both the key and the map to access secret hordes and lucrative pharmacological gardens
3.The trade between the Swamp Drunks and Jukai is prohibited , thus making the role of middlemen lucrative . Assuming you can avoid the snares of being set up to serve as an offering for the Peace men and their smuggler catching quota, or being unable to discern the esoteric from the worthlesss
(pretty much in the text).
4. Another money earner for the broke , homeless , and heavily armed ; is clearing out some of the watchtowers of former expansion. When these get used by shallow-boat pirates , murder cultists, street gangs or other banes to peaceful business,  it can unclear if they "belong" to the Swamp Drunks , with its unclear semi-state hood. The safest solution is to pay adventurers to clear them out and then arrest them if it turns out the towers occupants had enough family connections to cause unrest.
5. The exact nature of the Melanic Moors is something two very different groups are invested in.
One group is the University of Jukai , specific the House of Epistegeology who will fund missions of discovery and research , that look a lot like  trespassing  , burglary and even kidnapping. The other group is the Jug-Fellows.
"Jug Fellow"is term that is normally used to refer to a temporarily camaraderie formed around the sharing of a 5 gallon jug  . But it also refers to the secret societys that each form around a tense onion layered secrets , analogies, deceptions and bizarre estoeric truths relating to the moors.
Each will teach a new member a truth , then once the member has proven themselves, they will reveal it to be a lie. Then when the fellow discovers the various ways that it being a lie has truth to it, they will reveal the deeper truth to it.
The Jug-fellow-societys are fiercely protective of their mix of knowledge, insight and deception , and while they don't have the deep pockets of the House of Epistegeology, aiding them in keeping the secrets of the Moor secret , will earn valuable allies.
6. Passing through the wrong area of the Melanic Moors (or at the wrong time) could result in a Jug-Fellow band demanding tax (preferable drink, but possibly song or other entertainment) . Refusing will result in the band disappearing with a laugh, and the travellers finding themselves inexplicable lost and the Jug-band show up again after a couple hours to ask about that tax again.
Posted by scrap princess at 06:02 2 comments: