And so we reach The Tower of Babel, the "Lawful Neutral " , the scrap take on Mechanus.

It as modrons too , which I didn't bother renaming. Modrons weren't listed as a brand identity for d&d last I looked, but a)likely I'm wrong b) might have changed . YET c)this is free.

That's a total of 10 "realms" (aka planes) , which doesn't match the 9 alignments or the 16 Outer Planes of planescape (17 if you include the Outlands ).

The Grind and Erebus are meant to be "transitional" realms , realms that are halfway from becoming a realm of their own and just being a feature in another realm.

The Infinite Library is an example of something that could become a realm at some stage, but for now is just a feature of an existing realm.

So the imbalance of realms hopefully suggests something like continental drift on a metaphysical level.

It's also because both Archeon and Limbo were too interesting to not include a version but fuck trying to make Bytopia , Arcadia, Elysium, Arborea etc distinctive adventure rich places.

In regard to the remaining planes..

So Bytopia, Arcadia, Mount Celestia  , Ysgard*, were converted into Pinnacle of Virtue ,

Canceri and Nine Hells became Heart of It all

The Abyss and Gehenna became The Flesh Rift

Limbo, Pandemonia, Mechanus, Acheron got a 1 for 1 translation.

Outlands and Sigil had some influence on Vermin Road.

I tried to make up new stuff as much I could, yet still used core concepts that I felt were too perfect to try and redo. Like the Lawful Neutral plane being clock work , or a Void of Floating Cube of rusted weapons crashing into each other.

I didn't even try and do anything with Sigil however. There's little I would add to it ,and it feels too Planescape to just keep it.

*yeah I know it's a chaotic plane , but that's just what happened

So that's it, that's all I managed to do with before the burn out. I absolutely don't  recommend doing a project of this size, not unless you can manage any project bloating tendency and/or have a clear template to work to. Otherwise the project will become vast and unwieldy and one loses the ability to hold it all in memory and you'll find yourself rewriting things , failing to connect bits , or disproportionately expanding  aspects.

I guess the question is will I ever come back to this? I definitely needed to kicked out of aspect of my psyche that's responsible for nagging about projects, so basically No, but, hypothetically , what it would it need to finish it would be :

a) Looking at Grind to make a Template

b)Then use this Template to work out whats missing from other Realms , and also converting existing content to closer match Template.

e)Go through and make sure cross references between Realms match

And most of all

f)Someone who isn't me , is a ruthless editor, is adequately professional* ,and is extremely resilient to project drift/bloat, to  do steps a ,b ,c and possibly e.

g)I guess some more art to match the art already? Like a collage landscape +2-3 pieces depicting a creature from the realm? SEE IM ALREADY ADDING TO THE LIST

*the bar in DIY rpgs is incredibly low fyi. But if this sounds like your kind of hell, email me at toiletworldultra@gmail.com to discuss time frames, your rates , previous experience (if any),etc 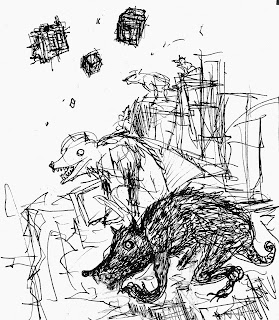 Planescrap : Heart of It All

Heart of it All. The scrap take on the lawful evil hell/ Baator. Previously named Heart of Iron and there might be a couple of spots were its still called that.

All got about 30% done and had several major revisions (i.e delete everything but a couple of tables) to it.

I never came up with a good city crawl mechanic for it either, and those were some of biggest obstacles to getting this one done.  I also struggled trying to get mortals, souls and devils to be all interconnected in a economy that kind of made sense. Might of just over thought that one .

Meant to do a lot more with post-life debt and weird soul punishments, plus give this place its own currency and play with the idea of money as distilled suffering.

All that I manged to do is some broad descriptions and a lot of niche tables.

Posted by scrap princess at 17:39 No comments: