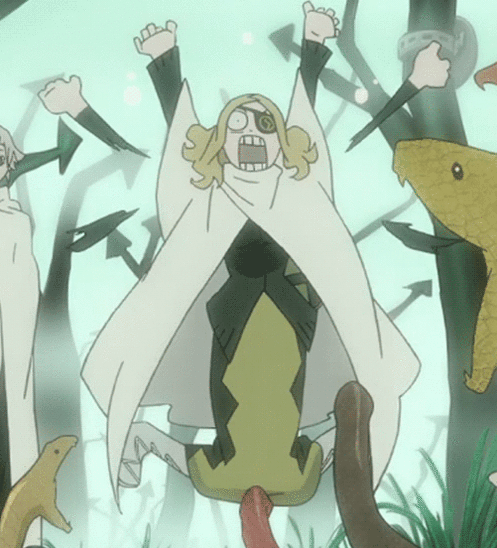 The locusts looked like horses prepared for battle. On their heads they wore something like crowns of gold, and their faces resembled human faces. 8 Their hair was like women’s hair, and their teeth were like lions’ teeth. 9 They had breastplates like breastplates of iron, and the sound of their wings was like the thundering of many horses and chariots rushing into battle. 10 They had tails with stingers, like scorpions, and in their tails they had power to torment people for five months


all images found on http://animationsmears.tumblr.com/

Email ThisBlogThis!Share to TwitterShare to FacebookShare to Pinterest
Labels: angels, animation smear, cartoon, demons, every part of the world contains all of the world, good thing I can do what I like around here, monsters, mythology, spirituality, the sublime may be seen in the banal

PDF
Sorry kids that I don't post as much as I used.
Find it harder to concentrate on writing stuff than I used to. Not sure why.
But , like, have you seen the wealth of content on other blogs these days?
You can get so so much diy d&d "weird osr" that I feel comfortable reclining reptile like into the background.

"But the jungle has now been abandoned by Zyan above. The visitors no longer come. All but four of the hanging pagodas stand empty and derelict. Each of these is occupied by one of the four remaining hanging merchants of Zyan"


"A single strand of it, teased free and tied around the finger, wrist, or neck of a victim, ensures their compliance in all things; so long as the strand is still attached to her head, the witch can command it to sever the member around which it is tied"


http://rememberdismove.blogspot.co.nz/
"Ice lice. The size of small dogs. Mostly live on mammoths and other huge mammals. Will drain a human dry in under a minute, then crowd around the corpse trying to figure out why it doesn't have any more blood in it"
http://renfieldscat.blogspot.co.nz/
"Prototype staff members. Bodies halfway carved into dolls."

"Kalkiskordivaay, Marchioness of the Wormwood Star. Appears as a leopard with the head of a woman of no mean appearance, her red-gold hair oddly cast in the light of a crown of pale green fire."

http://gameswithothers.blogspot.co.nz/
"Ix is between death and life, her daughters dead or missing, her city a sepulchre beneath which she weeps eternal rivers of poison and forgetfulness. The rivers flow forever, into our own waters. They remind us of death and we die or go mad.
Her city and our first home, treasure trove, altar and throne of the best god, is lost to all but the dead and those unlucky enough to be invited."
http://whatwouldconando.blogspot.co.nz/


"for the alzabo will have all the feelings the father had towards the child in addition to wanting to eat and make company of their memories. This is not a parroting of the sounds and mannerisms, it is perfect and sincere"

As I just went through these to quickly find an example of the magic there I found pages and pages of content I haven't had time to read let only digest and shit I'm sorry guys I hope your writing brings you joy as now all our attention is stretched so thin that you don't get the accolades you deserve.

1. Gravity Lances:
Gravity as in severe , gravity as in an exorable force , these lances are very long and stretch through time and space and are made of moments.
The knights begin their charge towards each other , each part of their lance a specific moment in time and space (the king lives, the kings dies, a mountain is formed, a child is lost , a city burns) and the final impact is resolved at the same time as each of the individual moments, the lances themselves like horrible fractal quicksilver nightmare mirrors, the knights; like a black sun eating the sky  like a buzzing fly instead your eyeball.

2. Shark tooth house:
A dolls house of teeth , thrown at someone it, it swallows them, cutting deeper and deeper the longer they take to find their way out.

3. Land Mine:
Like those dirtballs in Tank games, this gross looking tree cone (as Casuarina or Banksia but moving slowly like dying baby birds) spews out dank soil when impacted, filling and probably entombing a 2 metre cube .

4.Final Word Knife:
If you stab someone with this knife, (appearing like Cinquedea sharpened down to a sliver) , it will kill them. Not necessary then , but eventually, no matter how later, no matter what seeming other cause, the death will always be claimed to you via this knife , in every book and cosmic writ.

5. Murder Tree:
Like a 2.5 metre dead tree if trees claimed brittle metal as their substance and not wood. It blurs and twists but never quite when you look at it, always like it was just before you looked. Like noticing raindrops or ants moving in grass.
It's heavy but the weight is carried by Wisdom not Strength. It will crush, impale, flay and tear. Then  carry parts lamenting and twitching off  your defeated enemies.
These trophies will only cease when rotted to bone.
Until then, they remain continually unreachable in the razor thickets , like Tantalus grapes.
These were first brought to earth by angels and can be still found used by them.