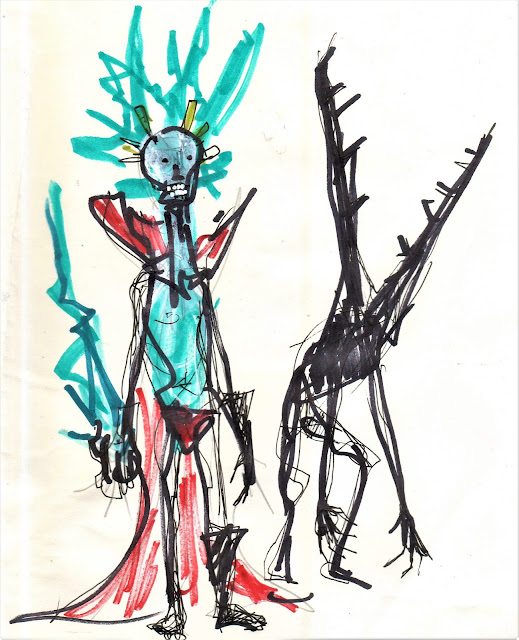 Another post with highlighting or creating hooks to use monsters for Fire On The Velvet Horizon.
This post features..
BRAIN-STORMERS
Maniacs who supercharged their brain with the energies and crackling knowledges of the sky itself!!!
1. A proto-brainstormer would make a great patron for adventures, requiring (and paying v.well for) a worlds-span worth of ingredients, monster parts and materials. This all resulting in a superpowered skycastled supervillain makes for a delightful twist if the players don't learn what the results of the would be dictator of the heavens plans are. (pretty much in the text)
2. The final results of research being the Golden Elixir "Anemoi". This being the substance directly injected into the Brainstormer-to-be's brain. If found or stolen in other circumstances, it makes for a certain amount of dilemma. It's worth a great deal , but selling it means it will likely result in the creation of a Brainstormer. (pretty much in the text)
3.What gives the Brainstormer their power and mental unhinging is the supernatural awareness of inner and outer workings of the heavens themselves. While they tend to not do much with that knowledge other than exert their ego, if something about the sky is needed to known (say the climate is heading towards an iceage, a hole into outer space has been created, an upcoming superstorm is approaching or even an exact weather report for a year benefiting a naval invasion) they would be the ones to know it.
4.The Cloud Palace that a Brainstormer builds is an obvious dungeon, either with one in it, or one post -Brainstormer. The post -Brainstormer palace could be run with a timer, as parts of it break up and disperse, or the whole thing could of have drifted into an area of unnatural stillness of air.
This would prevent it from falling apart and allow new occupants to have moved in and claimed it for themselves, adding another aspect to it.
(pretty much in the text)
5.One such Cloud-palace could of developed a mini-society from the former servants and kidnap victims of the Brainstormer. Maybe the kidnapped victims have no wish to return home and are praised as the Queen , now the King has fallen, by the servants. An adventuring party could be enlisted to find a stolen princess and instead find her now enthroned .
6.While a high level threat , a low level party could still deal with a Brainstormer if enlisted or able to do sufficient research about the Brainstormers former identity and thus predict and impersonate a potential kidnap victim , allowing for a great advantage in an assassination attempt.
CAPITUALTORS
Morose bisected jawed fatalists , a mercenary people that can hide inside the realm created by your eye
1. As a hex encounter, their hives "look like grey smoke piled in drifts" are found in woods. Unpredictable but not necessary dangerous unless provoked, i.e the party disturbs the hive and takes away some of the stolen art. Even if they don't mess with anything, a couple pc's might wind up having Capitulator hop inside their field of view just for something to do . (pretty much in the text)
2.The obvious use of them being hired to spy on the players, is most interesting if the players know nothing about them , and with only one character has one in their eye, they might assume the creature is invisible to the rest of the party. Assume the Capitualtor has to be present in the field of vision of the affected character to listen in , and give that character a chance to notice them.
If the party learns about the Capitualtor without the Capitualtor knowing this , this also gives them a chance to feed false information to their hirer.
The Capitualtor will need to leave the eye in order to relay this information. (pretty much in the text)
3. Their love of gambling could bring them out especially if the stakes or methods of betting are particular unusual . Even one in the employ of someone else might tempted to switch if an interesting enough bet is made. Stolen artworks could be wagered back from them
4. . What makes bets the most interesting to them are ones placed on a uninvolved individual who has a variety of forces acting upon them, especially ones where a group identity is conflict with an individual identity
5.They serve as particular difficult culprit for a "closed room" detective puzzle. So one has be inside the victims vision until they are alone, then sprung out to kill them, and hidden themselves in the eye of first person to find the body. They might still be there, pretending to be uninterested in seeing the case unfold, but really being involved. Infact if they become too interested they will lose their sense of "non-self"and fall out of their non-state of being inside someone's vision.
6. Their hatred (near hatred) for movements that are  "unembodied, unquestioning, passionate and zealous" could see them involved in a clash between art schools and victims they claim, raising the stakes to near civil war (let's assume a society where art schools are interchangable with political parties).
Posted by scrap princess at 03:37 3 comments: