omens and ANOTHER BEHOLDER

PDF So I gots a little exhibition thing at Glue gallery in Dunedin and I'm making some creatures what I already made so I don't mind selling them, and beholder is one I just made and showing you now 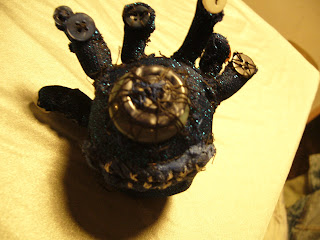 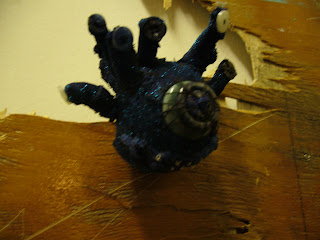 And now some rpg gibbets.  The process of welding on the better bits of Feng Shui to D&d are going well, and I spent a sleepless night in christchurch last night giving feats/schticks cooler names. My favorites so far are "Over compensating", allowing you to use an over sized weapon at no penalty, "A professional relationship" for weapon specialization and"Will consider anything" for no penalty for improvised weapon use. I think I'm funny anyway.
Christchurch is little bit on the trashed side at the mo, there were some good aftershocks when I was there, and its a particular kind of adrenaline jolt you get from them, this "the world has stopped making sense" kinda thing that you also get from finding fire in unexpected places and seeing ghosts.
Anyway my folks are there, and not under a pile of rubble and I made my yearly attempt at a family connection.

So decided barbarians are gonna be called Abominations and be like this guy: 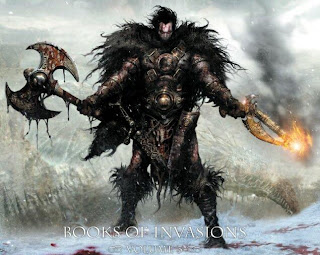 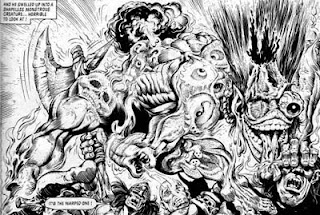 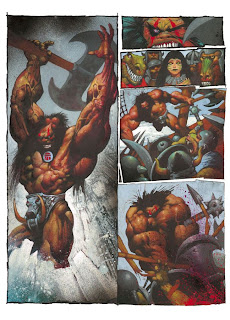 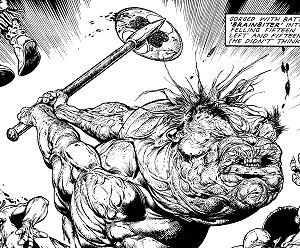 That's him at the top and below that him using his "barbarian rage/warp spasm" powers.
And yes he was modeled heavily on Cu Cuchulain (holy shit the spell checker knew that), an Irish folk hero who would flip the fuck out and mutate heavily and kill everyone
"

The first warp spasm seized Cuchulainn, and made him into a monstrous thing, hideous and shapeless, unheard of.  His shanks and his joints, every knuckle and angle and organ from head to foot, shook like a tree in the flood or a reed in the stream.  His body made a furious twist inside his skin, so that his feet and shins and knees twitched to the rear and his heels and calves switched to the front.

The balled sinews of his calves switched to the front of his shins, each big knot the size of a warriors bunched fist.  On his head, the temple-sinews stretched to the nape of his neck each mighty, immense, measureless knob as big as the head of a month old child.  His face and features became a red bowl:  He sucked one eye so deep into his head that a  wild crane couldn't probe it into his cheek out of the depths of his skull: the other eye fell out along his cheek.

His mouth weirdly distorted: his cheek peeled back from his jaws until the gullet appeared, his lungs and liver flapped in his mouth and throat, his lower jaw struck the upper a lion killing blow and fiery flakes large as a rams fleece reached his mouth from his throat.  His heart boomed loud in his breast like the baying of a watchdog at its feed or the sound of a lion among bears.

Malignant mists and spurts of fire  the torches of Badb  flickered in red in the vaporous clouds that rose boiling above his head, so fierce was his fury.  The hair of his head twisted like the tangle of a red thornbush stuck in a gap; if a royal apple tree with all its kingly fruit were shaken above him, scarce an apple would reach the ground but each would be spiked on a bristle of his hair as it stood up on his scalp with rage.

The hero-halo rose out of his brow, long and broad as a warrior's whetstone, long as a snout and he went mad rattling his shields, urging on his charioteer and harassing the hosts.  Then, tall and thick, steady and strong, high as the mast of a noble ship, rose from the dead center of his skull a straight spout of black blood darkly and magically smoking like the smoke from a royal hostel when a king is coming to be cared for at the close of a winter day."
Omg I have such a wide-on right now from all the slaine and what the fuck? That's a barbarian, yes conan all very good but vanilla and fuck off ,  this tingles my jingle so  yes, Irish folk stories, very much on the drugs.
So Slaine was from the British comic anthology 2000 ad which was also very much on the drugs, and if you have not read it you should track down as much as you can. Like its pulp as all shit, but it blew my mind as a kid, like it scared me and traumized me, but in a good way. Like you go from reading spider man where peter parker spends half a story arc crying because he punched some guy too hard , to Judge Dredd, where there's cyborg pirates throwing people into a ocean of the future, which was so diseased you died in seconds. And then they shoot some cluster nuclear missles and kill a couple of million people and Judge Dredd goes and fights them all and it turns out the main pirate guy is actually a future russian, and so Judge Dredd's bosses ring up the future russians and are all like "hey what the fuck is this?" and the future russians are like "oh is our face red, here we nuke a couple million of our own people and we all even steven." And Judge Dredd's bosses are like cool, "all well that ends well" and my ten year brain is blown. I mean there was a moral, and it was government suxs but people are fucking stupid worms anyway. Compare and contrast to Superman, or batman whining about not killing people.
Like 2000ad was a very uneven ramshackle type of thing, and the humour was aimed at kids. No really. It was.
Other highlights include where the Atomic Biological Chemical warriors fought rogue t-rex's on mars. My poor childs brain can still remeber the scene where a trapped mother comforts her son to close his eyes because it will all be over soon, and then the t-rex eats them.
One of the robots was some kinda of chaos warlock ("deadlock") and did magic and had an awesome sword and another was programmed to betray ("blackblood") and he had photos of the sniper robot ("joe pineapples")dressing up in womens clothing and later there was Killdozer who thought he was a barbarian hero and yes very on the drugs.

Alan Moore wrote some of his first stuff for these guys, "Jr and Quinch" about 2 alien delinquents who killed and tortured people. The scene where Quinch is driving some kind of giant steam roller along a beach burned its way into my mind quite deeply.

I think the magazine had some system where the would give an artist X amount of pages and let them go for it without attempting to taper or moderate the end result, and it lead to phantasmagorical stoner spash pages, bizarre rambling plots, abrupt changes in mood and genre and why are you not looking this up right now? Abc warriors, judge dredd (especially anything with Judge Death, Judge Fear, Judge Mortis and Judge Fire) , Strontium Dog, Jr and Quinch, Nemesis the Warlock, anything drawn by Simon Bisley etc.
In conclusion 2000ad was a 14 year stoner metal geek in the best possible way.
anyway so ages back I mentioned a omen table thing and here's the system I'm using.
Basically the player draws (or you roll on a table or use  abulafia http://www.random-generator.com/index.php?title=Tarot_Card) a major arcana tarot card and each card has a little port folio and the player can get a +2 bonus or somesuch if they can say that this one roll is under its port folio.
But  also the card has a negative port folio and the d.m gets to put bonus/penalty on some appropriate adversarial roll for the player.
I'm doing it so the player has the option of checking for omens in the morning, and they draw the card and hold onto it and they give it over when they use it. And when I use the negative influence modifier I be all like "As you explain you situation to the Bastard King of Howling Meat, you have a horrible chill go down your spine. This is an unauspicious  day for such things.
Maybe you would prefer to use something tastier than a +2, like getting to use the bigger dice (d30 instead of d20 etc) or auto success. Anyway you get the picture.
here's a card list and their areas of influence

Wheel of Fortune
good:
Surprise!
e.g ambush related rolls, inflicting unexpected plans on people
bad:
the same but against you

The World
good:
accomplishment/completion
e.g survival checks to make it home. healing checks after battle
bad:
responsibility
e.g to hit or damage rolls against hirelings or steeds that you have put in danger


Judgement:
good:
hope
e.g anything you are trying to do with the odds against you
bad:
consquences
"so how many monsters heard that boulder come crashing down?", "gee I hope that girl we left behind in the ogre lair wasn't anyone important's daughter" etc

That took too damn long and was a little scatchy but I hope its usable to anyone
sleeeep nowww for scrapprincess mistress of ruin boiler of children
Posted by scrap princess at 08:23