PDF so monster johnston does this thing, where people give him a dungeon title (for example "the sunken vault of the gibbon king") he makes a GRAND mixtap cut and paste dungeon, and then you populate it (and if you are me, draw all over it).
I scanned the bits of paper I had done the key for this map, but computer problems mean I'm just gonna type it up for you. Means you will be able to read it I guess, but less drawings of bird skulls and monkeys in the corners. 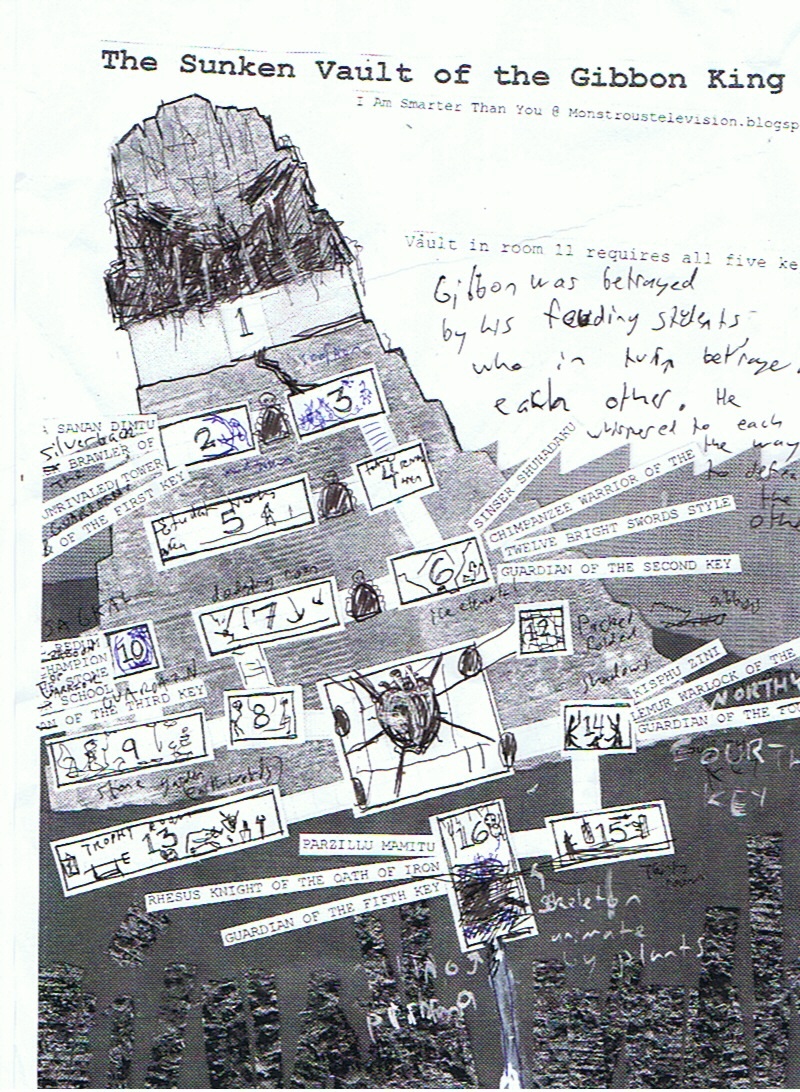 BACKGROUND:
The gibbon king was a frightening warlord over the sultry jungles of where ever. He had 5 different ape champions of various fighting styles underneath him and a flesh gobbling horde of gibbon warriors.
He liked nothing better than to sit atop his ebony and gold throne, and have captives brought to him. He would then eat them alive and shit them out a hole in his throne, to fertilize his terrible brain fruits in a room below.

But his warriors turned up him one day, burying him a rock slide  and then attempted to divide his rude kingdom amongst them. But the gibbon king visited each in their dreams and set them against each other. Each one in turn seeked out the services of the under-hill-man, and purchased conjuring charms and wicked spells to doom their rivals. The first to go was the Rhesus Knight. his aerial prowess and sword and shield style , no match for the roots of his lair turning feral and thorned, clutching at him at all directions and crushing him dead.
The next to go was the lemur warlock. His North wind fists and tornado kicks availed nothing against the dead, and the shadows took his strength and life.
Saykal Redim, the baboon champion of the stone warrior school, of such brute strength and fortitude, he would hunt elephants, but this was useless against the inexorable choking of a mud golem .

The 12 bright swords of the chimpanzee warrior hacked uselessly away at the ice elemental send to kill him, and so it did.

The last and seemingly victorious Silverback brawler, was betrayed by his betrayal. The simple wooden box which contained the dust , which when mixed with water , created a mud golem, was left in his chamber. A scorpion, possessed by the fading ghost of the gibbon king dropped a few drops of poison in the box, and the resulting poisonous mud golem was enough to best the silverback brawler.

The vault has since sunken slightly from some minor flooding in the low levels. The gibbon warriors are long gone, and so the vault remains a treasure undiscovered.

YOU WILL NEED:
Okay so I'm not going to bother statting monsters because everyone uses such different systems , ditto with treasure. So to run this you'll need to reskin or stat up or look up :

2 mud golems. as water elemental with grapple and suffocate attack maybe? One of them also poisons as well as suffocates

Rock weirds: as water weirds but are snake like forms of rock. Petrify instead of drown. People turned to stone by them turn into a stacked pile of rocks resembling the original form instead of a exact duplicate. If the rock pile is knocked over they can still be destoned as long as all the rocks are present. The risk is leaving a stone out (thus resulting in a missing body part) or putting a extra one (thus resulting in a rock internally .

Mummys: (16) but like waxed and leathery gibbons that can fold down to a neat cube. Half strength, but not possessing mummy rot or vulnerability to fire.

TREASURE THAT YOU NEED TO DECIDE WHAT IT IS AND EXACTLY HOW IT WORKS IN YOUR CAMPAIGN STUFF:
a simple wooden box. IF the mud golems substance is taken and dried and then kept in the box for a night and a day, if the dust is mixed with an liquid it swells and forms a mud golem which is under the command of whoever added the dust to the liquid. If you add the liquid to the dust (ie into the box) the mud golem formed will just try and kill everything near the box and then remain dormant
until the box is disturbed. When then it will attack. Sometimes the golem takes on the propertys of the liquid.

And is quite fragile.

Brain fruits:
These look like pineapples but more like a screaming face. If you eat them you dream someone elses memorarys. There is 8 of them. You would have to dig them up to see the weird screaming face. Otherwise they just look like the top of a pineapple with some sweet flowers and some scorpions running about.

Assorted coins , rings and personal effects can be found in the loam that the brain fruits grow in.

4 clock work hand sized monkeys that can be "programmed" by hella smart mechanically minded people. Currently they just maintain and repair the swinging blades and each other.

The 3 swords of the Chimpanzee warrior.
(when he wielding 3 swords it looked like he had 12, according to him anyway) , don't have to be magic, should be fancy though.

The sword and shield of the Rhesus Knight:

Possible salvageable animal hides, tusks , skulls, armour or whatever in the trophy room.

The treasure in the Vault itself.

Room descriptions:
1:
this is where the throne used to be. It's gone, revealing the shoot to chamber 3.

2:This is where the silverback brawler had his chambers. It is half covered in mud with a gorilla skeleton armed with knuckle dusters is visable. The skeleton has the 1st key on it. A wooden box is near as well. Disturb the box makes the mud rise up and attack , it's a mud golem that is also poison.

3.Brain fruits growing in a dark loam. The tops of them are like a pineapple and pale white flowers grow in the gloom. about 12 scorpions scuttle around this vegetation. They are not particular aggressive but will attack if you start digging up the soil, coz that's where they have buried their eggs.
They are exotic and poisonous.

4:THis room is overgrown with vile looking vines and is loud with the chirping of ominous frogs.
The frogs are ominous. But harmless.

5.This is the old student training area

6:A frigid chamber, where the lemur warlock met his doom. This chamber  does as much cold damage as you would suffer standing around in the attic. The chimpanzee is visible frozen in a block of ice against the far wall. You will need to hack through about a metre of solid ice to get to him. He has  a snow globe stuck to his hand. The snow globe radiates intense cold. It will freeze itself to whatever is warmer than what its currently touching and has just touched it. Shaking it summons (say if it has stuck to your hand and you were trying to get it off..) a hostile ice elemental.
The frozen corpse has the 4th key on it and one sheathed sword, and a sword in the other hand and one held by his foot. The swords are fancy looking.

7: A testing area with great big swinging blades and pendulums and spears all swinging around and stuff. They are  maintained by 4 tiny clockwork monkeys who store themselves in a small dolls house with a workshop in the corner .Working through this room exposes you to 1d8 attacks by the weapons. Roll a 1d8 to determine the attack bonus. The damage , roll a 1d4 to choose between a spike (1d4), a sickle (1d6) , a blade (1d8), or a pendulum (1d10) .

8 This entry was is framed by 2 mounted emu skeletons.

10: The Baboon of the Stone Champion style's chambers. Half buried in mud. This mud used to be a mud golem. The 3rd key is on his skeleton.

11. This is where the vault is kept. It is a great steel heart suspend on metal spikes coming from all angles. It has 5 keyholes visible. It should be  difficult to pick. A failed pick attempt causes the heart to "beat" and ring twice like a gong. This would summon gibbon warriors had they not all gone awol 30 years ago. The sound can be clearly heard from miles away though, so someone might show up later though. Opening all the key holes makes it open like a flower, and then mummys attack you from room 12.

12: Climbing up the sloping shaft reveals a room lined with leather squares, but otherwise empty. It's pretty cozy. Attacking the walls here or opening the vault will cause the squares to unfold into waxy leathery gibbon mummys.  16 of them.

13. A trophy room with skulls and spears, hides and skins and whatever. Some of it is still good, other bits rotted away and/or spotted with mildy luminous mushrooms.

14. A dark room which light seems hesitate to fall upon. Robes and the 4th key are visible on the floor. 8 shadows lurk here and wait for a good chance to attack.

15 A training area with the downward end (it has sloped from the flooding) flooded. splishing around in the water has a 10% chance per round of attracting the albino piranha  swarm from 16. 100% if you are bleeding or wearing a liberal amount of bacon.

16: A tall narrow chamber flooded with deep cold water. Viscous thorny roots have burst from the ceiling and are wrapped around a skeleton of rhesus monkey in chainmail. It has the 5 key on it person.
The water is waist deep , except for a metre wide crack in the floor that drops about 100 metres down into a underground river. So.. watch out for that. Being in the water has 20% chance of attracting the attracting the albino piranha . 100% if you are bleeding or wearing a liberal amount of bacon.
There is also a decent shield and sword at the bottom of the room here.

THAT WAS FUN FUN, THANKS MONSTER JOHNSTON! I LIKE YOUR MAPS EVERYONE SHOULD UNLESS THEY PREFER HUMPING GARBAGE OR SOMETHING
Posted by scrap princess at 23:39