Climbing on things and stabbing them in their stupid face

PDF Fighting big creatures. What is really cool is people whaling away at a dragons ankles until it explodes an hour later,  occasionally falling over on the spot  because it hit you too much and someone touches you with glowing blue hands and you get back up again.
Okay that was sarcasm and hyperbole. But yeah what do when the players wanna climb on some big ass monster and stab it in its stupid face.

Like examples from media are pretty endless. SO I've been trying to think up a nice general system (more for if the players are like tiny animals trying to kill a dog or goose or something, but that's a whole other thing)
to handle this.

Some general notes about making sub-systems :

a)Climbing on stuff larger than you is absolutely stupid in real life, so lets forget about trying to accurately model that. Instead, what do you need to account (ie people can or can't left up t-rexs? can or can't survive been kicked in the face by t-rexs?) for in your game, as not to max out the acceptable bullshit for fun quota in your game? Model that.

b)you can make up rules for anything on the spot, and trying to have a rule for everything is counter productive because then you have to look said rules up. Unless you have/are a Mentat.
(
In that case, say hello to Agent Dale Cooper for me and tell him to LISTEN TO THE FUCKING GIANT FOR FUCKS SAKE!!
)
So if you are using/considering making a subsystem you gotta think how much does this come up? and is there enough generalities in the situations to make a subsystem around them and is it going to be fun to have one? More or less fun than just ruling based on player skill on the spot?

Say haggling. Let's say you want it to come up a lot in your games because its a Heathens & Hovels setting and you think it adds a touch of authenticity to the whole thing.

And lets say it's not fun (or not fun all the time) for you and the player to ham it up at each other spruiking the miraculous properties of this chicken vs the hunger of their 17 limbless children etc etc.
And you want something that has choices involved, because choices are what make the whole thing fun, rather than roll a charisma check boom it costs this much thing.
THen you should have a subsystem! weeeee.

c)Trying to make a subsystem do all the work for you is futile. As in it's still gonna to need you to make rulings on the spot and players to think up cool things to do that just activating shit on their character sheet. Trying to make it do all the work is MADNESS. As in early grappling rules. As in; trying to work out if its easier or harder to put a centaur or drider in headlock blah blah oh shit its an extensive modifier table. And no-one likes them. NO-ONE.*
So instead treat the subsystem like a general framework ad hoc system to refer back to or build upon as needed, and use the groups interpretation of the circumstances as your guide rather than trying to get the circumstances to fit the subsystem.


Okay that was over-long.

Anyway this subsystem " Scale the Bastard " builds on my homebrewed rules with size coming with built in damage resistance. (and much lower hit points for big creatures)
And by climbing onto the creature you can bypass some or all of that damage resistance depending on much effort you are willing to spend climbing to a good position.

If you do not have damage resistance for large creatures, instead you could use a straight damage bonus for better positions, or improved critical chances or what have you. 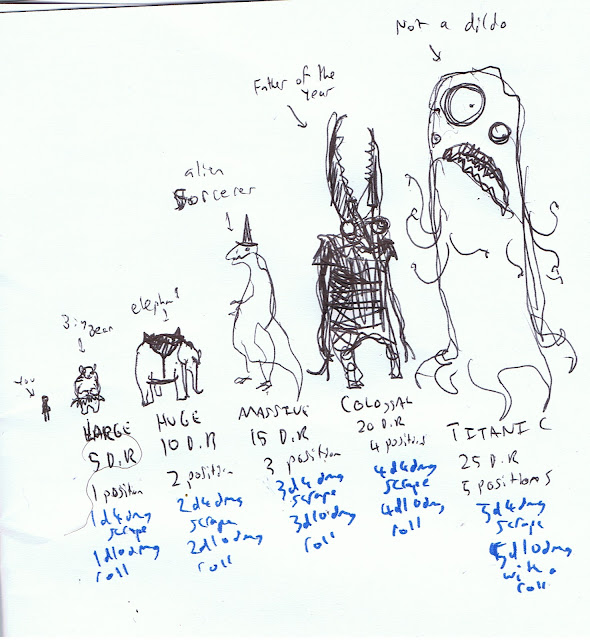 We are ignoring tiny creatures because what ever, like they are going to have one or 2 hit points any way. And if you want to use this system for gremlins climbing on people have them do like +5 damage if they can get a chance to get to the face or neck or something.

First things , starting the climb. This is a dex/strength
/climbing check. YOu need to be way too close to the creature first,  so you go last in the initiative (or draw an attack of opportunity or whatever) and if it hits you in the round then you can't make the attempt.
SO distract the creature or sneak up on it or whatever. 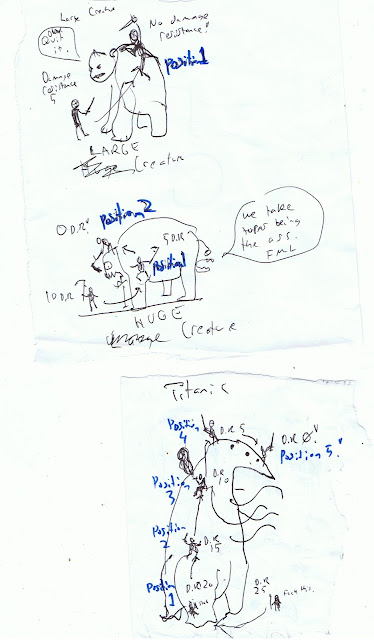 Once you are on it , congratulations! You are hanging of its side , clinging to it's ankle or whatever. This is called a 1st position. Attacking from here means you get to shave 5 points of that damage resistance! If it's a large creature, that probably  means you are now sitting on its shoulders stabbing it in the face. It's damage resistance is zero, and there is no where left to climb.
If it's a huge creature, you are most likely hanging off its side, and while you get a better shot at its kidneys or gaps in the scales, it still has 5 points of damage resistance left.
So you keep climbing and (if successful) you reach its head (a second position) and can stab it with no damage resistance what so ever!

Basically each time you spend a round climbing you move up a position and shave off 5 points of damage resistances. So while something large (a kodiak bear or ubergorilla) has only one position , a lesser Godzilla has 5.

This is very general and very abstract and is meant only as guide. If the  beast the character is fighting has weak knees, let them get them advantage only half way up (and they say they are going for the knees). If the characters jump onto it from a 3rd storey building, wahey let them start at the 4th position or whatever.

If they are going for its eyes or something, assume you can trade damage for maiming. So instead of doing damage the creature is now blind. Shouldn't blinding do hitpoint damage? YEs but hitpoints maaan they are more like "hit points" and shut up.

Okay so every round you are on the creature you can do one of these things:

Attack! Attack that thing! Show it who's the biggest slice of cheese in the dales!:
You attack bypasses its damage resistance for 5 points per point of position. If it tries to get rid of you , you are at -4 to the resulting stat check though.

Advance! hand over hand up its filth encrusted shaggy hide!:
At the end of this round you increase your position by one

Scramble! It can't catch you, you are an audacious wind! Har HAA!: Like advancing but you are not trying to get anywhere in particular, just scrambling all over it so it can't get a fix on where you are .

This gives you +2 bonus to any stat checks to remain on if the creature tries and scrape you off or rolling on you, and you may use your dex instead of strength if it tries to shake you off.

Hold ON! For dear , sweet,  capricious life, hold on!: You have found a particular firm matted clump of hair or scaly ridge and have braced your self. You can attack (bypassing any damage resistance as per your position) as well as do this but either at -4 to the attack roll or -4 to any stat check to remain on or some other arrangement of that 4 point penalty. You also get -4 to the dex check to avoid taking damage from a roll or a scrape.

MEANWHILE the beast can try and dislodge you ! yes you impudent flea!
This is generally instead of it being able to attack someone else.

Shaking you off: means that you have to make strength check or fall off! Falling damage as per normal.
If you fumble that strength check it means you are flung off! Double the distance you were at before the flinging to determine how much fall damage you take, and roll a scatter diagram to determine direction.
If you are falling off (not flung off) you can make a dex check and grab on a couple of positions lower (1d3 maybe? Or base it on how much they succeed the dex check by).

Swatting at you: it tries to attack you as per normal. BUT you get a bonus to your a.c of +1 per position , or +2 per position if you are taking the scramble action. Ha ha! It can choose to do damage as normal or do half damage and make you do a strength or dex check or fall off. If gets a natural 20 you are flung off. If it fumbles or misses by 5 or more , it inflicts damage on itself, bypassing  damage resistance as per your current position.

Scraping: it either scrapes itself against a nearby wall or scratches itself like a dog with it's hind leg.
You need to make a dex check (with +2 if you took the scramble action, -4 if you took the attack or hold on action) or take 1d4 per total positions the creature has (ie 1d4 for large, 5d4 for titanic) and then make a strength check (with bonuses if you are holding on) or fall off

Rolling: the creature proceed to roll over and over trying to squish you like the pest you are. This takes a round to begin (giving you effectively one free round) but each round it maintains you can either choose to make a dex check (failure results in a 1d10 damage per total positions of the creature, ie 1d10 for large, 5d10 for titanic) or drop down a position. If you are on position 1 you are now on the ground. The creature may be limited by the terrain in how far it can roll and can't do anything else while rolling. Is prone if that matters for something the size of a building.
If you make attack actions while on it you are nuts but get to add half of any crushing damage you take to the damage you do.


I feel a well constructed table could of made that so much more clear, but my attempts to do so were sadly lacking. IF you know your players are going up against a MASSIVE BASTARD you could make yourself a map of said MASSIVE BASTARD with the different damage resistances for different areas and situational modifiers/mini challenges for hanging onto to its poo dreads vs clambering up its scaly legs. Also giving the players the chance to research vulnerable areas on the creature or spots that it cannot reach you if you are so placed.
Like I said earlier use these rules as guideline , modify heavily for circumstance and player plan and make sure there's a firm understanding between you and your players about what the bullshit quota is.

Think the creature taking the roll action might be the best for it all the time, so maybe that needs be limited by having enough room or something,