PDF The carnage cube happened.
Which was a "warlords of vornheim" game set on one of the cubes of archeon , and unlike most of these player vs player it was completely in canon because something something doomguard promoting entropy.
Anyway the point was I made a 6 sided cube (..okay , 6 sided as in sides that can walked on) out of lego and then made lego figures out of everyone's characters and then with teams of 3 they proceeded to try and kill the shit out of each other.


And don't think that was because it was some drawn out siege because of that.
No it was 8 hours of brutality.

Look here's the teams. That above is Team Knight. From left to right : Sir Manning. Currently responsible for far too much of the mess in cobalt reach. Played by Trent , who runs New Feierland, famed for being a wretched , dire setting of colonyism and dying in mud. My level 7 monk is currently dead there but since he is leaking acid from a mutation picked up in cobalt reach he is not rotting nor turning into green slime. Green slime because there is now lake of green slime because there were fish guys who were dicks and someone had a potion of green slime from the Vats of Manzarin and fuck your ecology fish guys you tried to steal our stuff (more explain here).
Anyway he has the best looking + 3 shield ever from a dungeon shaped like a phrenology map.

Shit I'm tangentialing but this illustrates my point of how absurdly byzantine this shit gets.

The guy with the hair is Sir Ward, a would be paladin with collateral damage count in the 1000s , but regarding as one of the nicest flailsnails p.cs. Later that session he would drag his best friend with a fish hooked studded net face first over bear traps. He is played by Reynaldo of bum rush the titan.

Lastly The Green, a muscle wizard, currently active in Monster Johnstons Wizards Gang of New Wizard city and bringing to the table some of the most frightful unhinged magic items. Kasper the player did warn me about them before hand , but the full horror of them in action escaped at them time, and so I did not fiat down on all the possible combos. (items including the ring of 9 dragons which allows you to make exact copies of your self, yet share the same stats,  and a potion that increases your armour class each time you get hit) This was one of the lessons. Some people bring a crossbow some people bring a staff of unlimited dimetrodon summoning, and that's not important. What's important is if that player has some horrible dimetrodon based combo they plan to unleash.


That's Malice Afterthough on the left. He was missing a hand and his favourite flaming sword had recently been destroyed. He is played by Zach and he frequently adventures with Sir Manning and Sir Ward. But today he would attempt to destroy them utterly over some money.

In the Middle is Blixa, played by Zak Smith of D&DWPS infamy. The two Za(ch/k)s reputations as twisted schemers and dire exploiters of lard and spike had team knight in utter conniptions in their planning session. It was hilarious. No, wait it was funnier than that. His lego figure is wearing vampire slaying pants because Blixa has it in for vampire and has killed Strahd twice. The vampires started it with the cruel death of Gleichman the war dog, who now has a commemorative zoo in his name. Blixa is paying gold if anyone has anything zoo worthy captured.

In the Santa hat is Noggin , a long toothed , promoted henchmen , played by Barry, and who immediately set to coating a fish hooked net with wyvern poison.
Because he is British and the British are horrible. 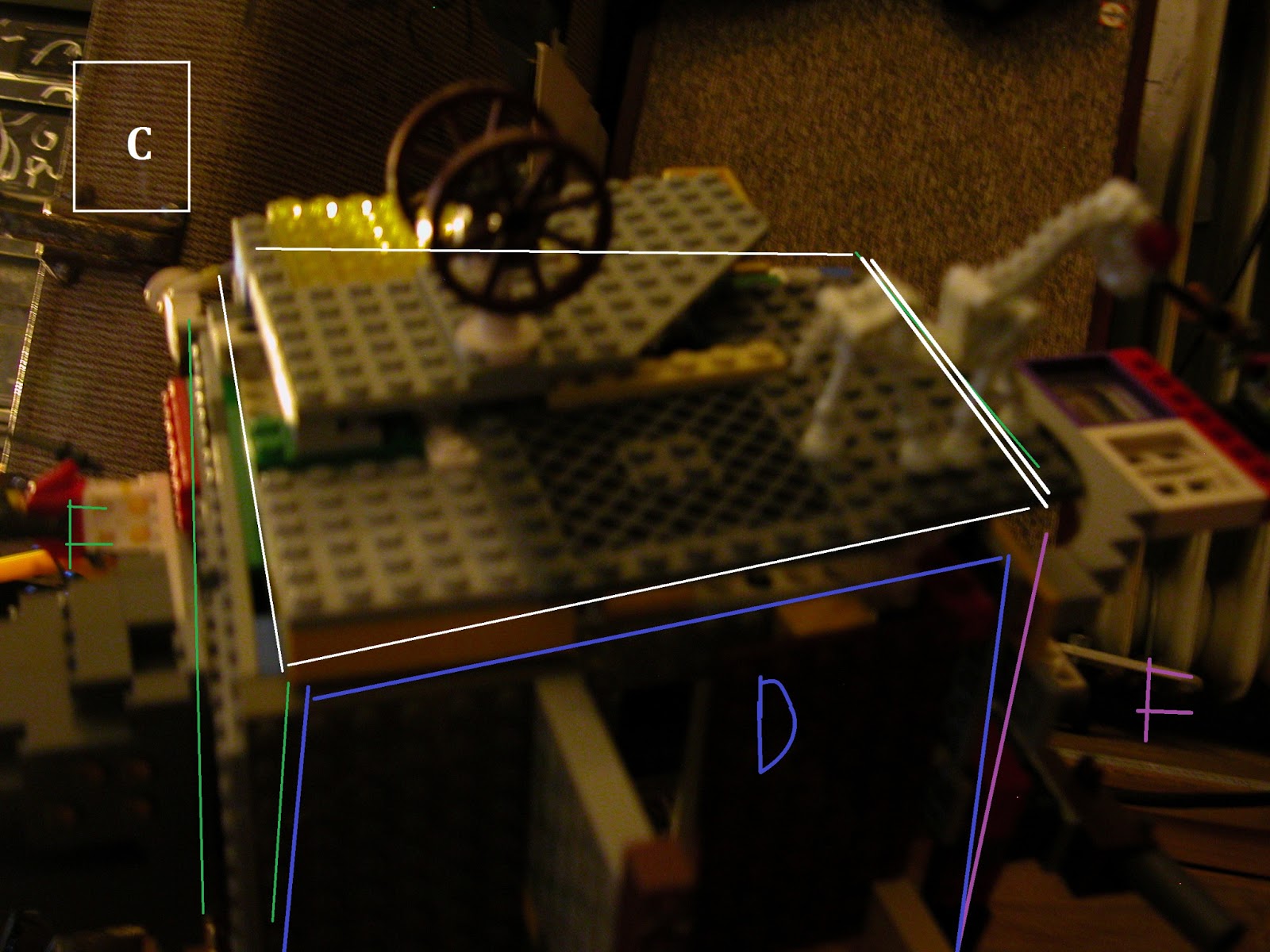 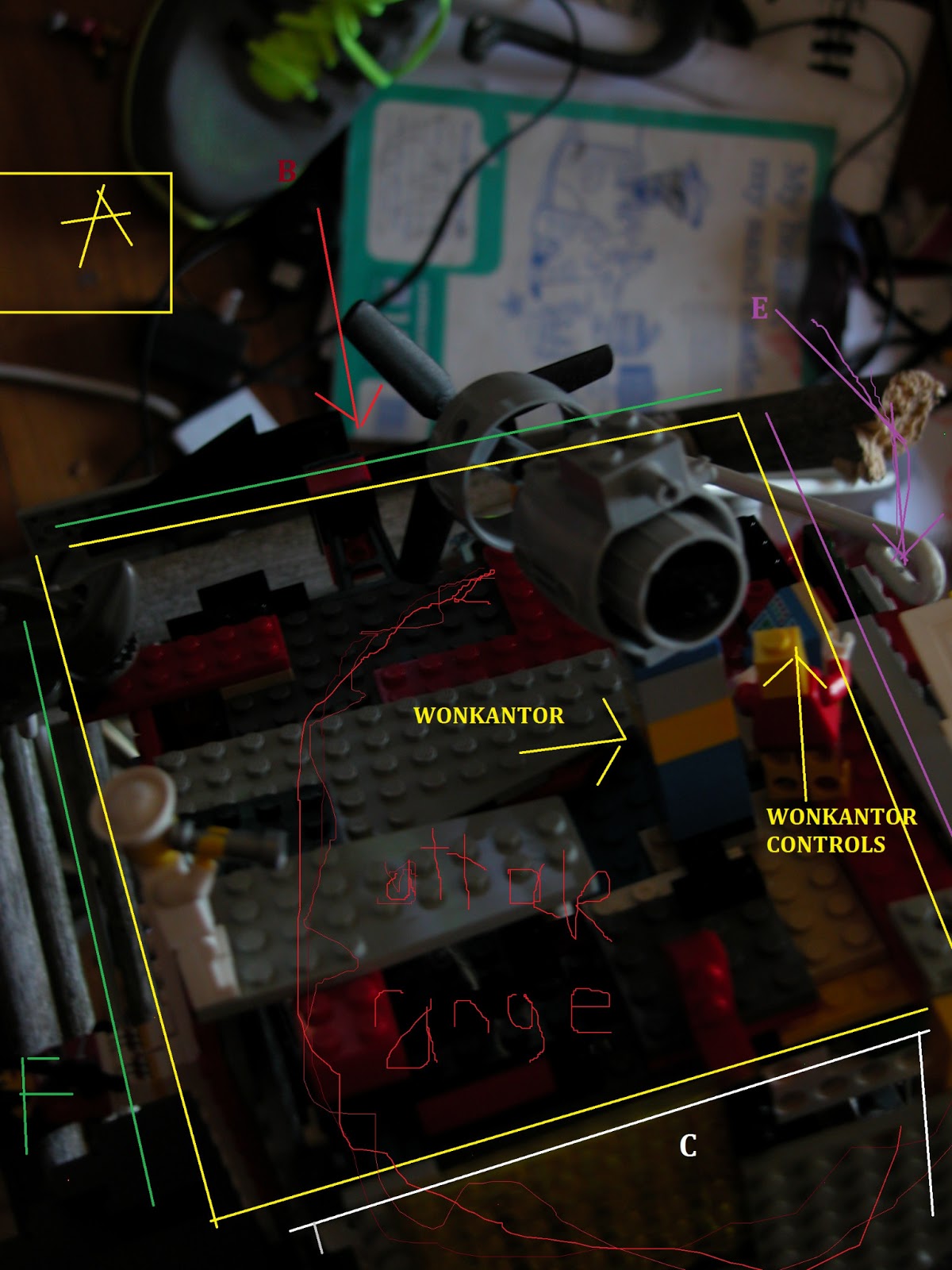 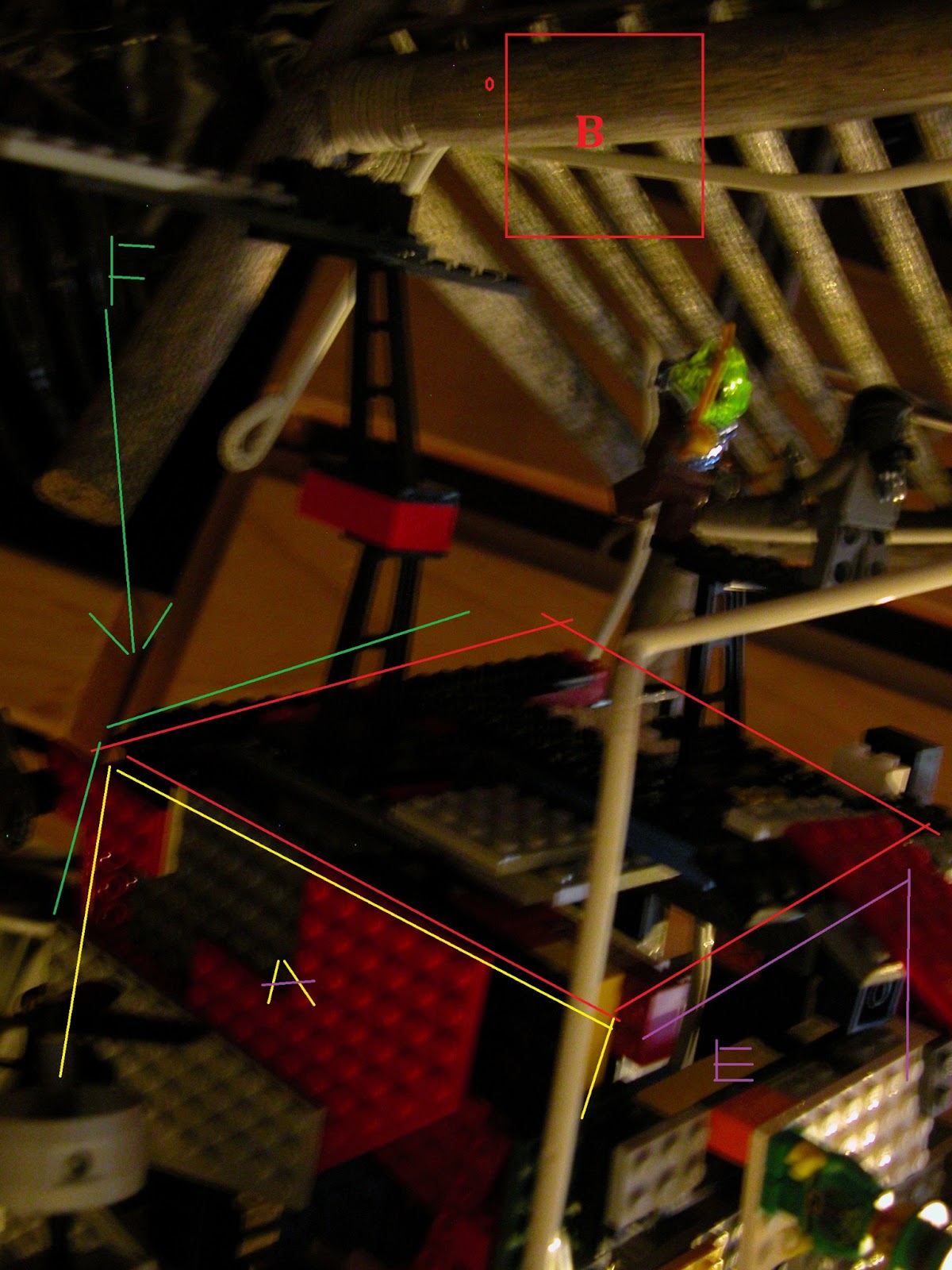 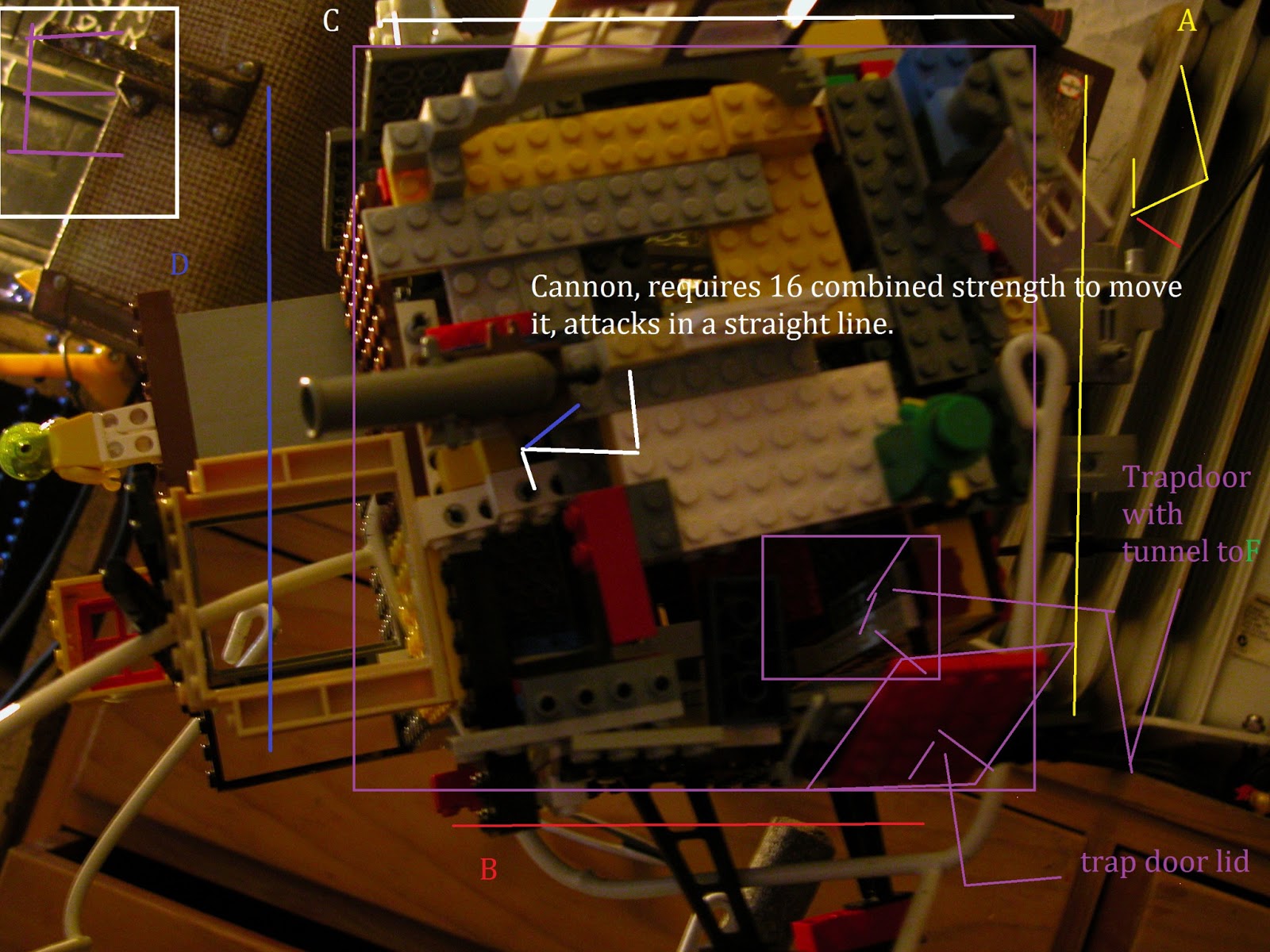 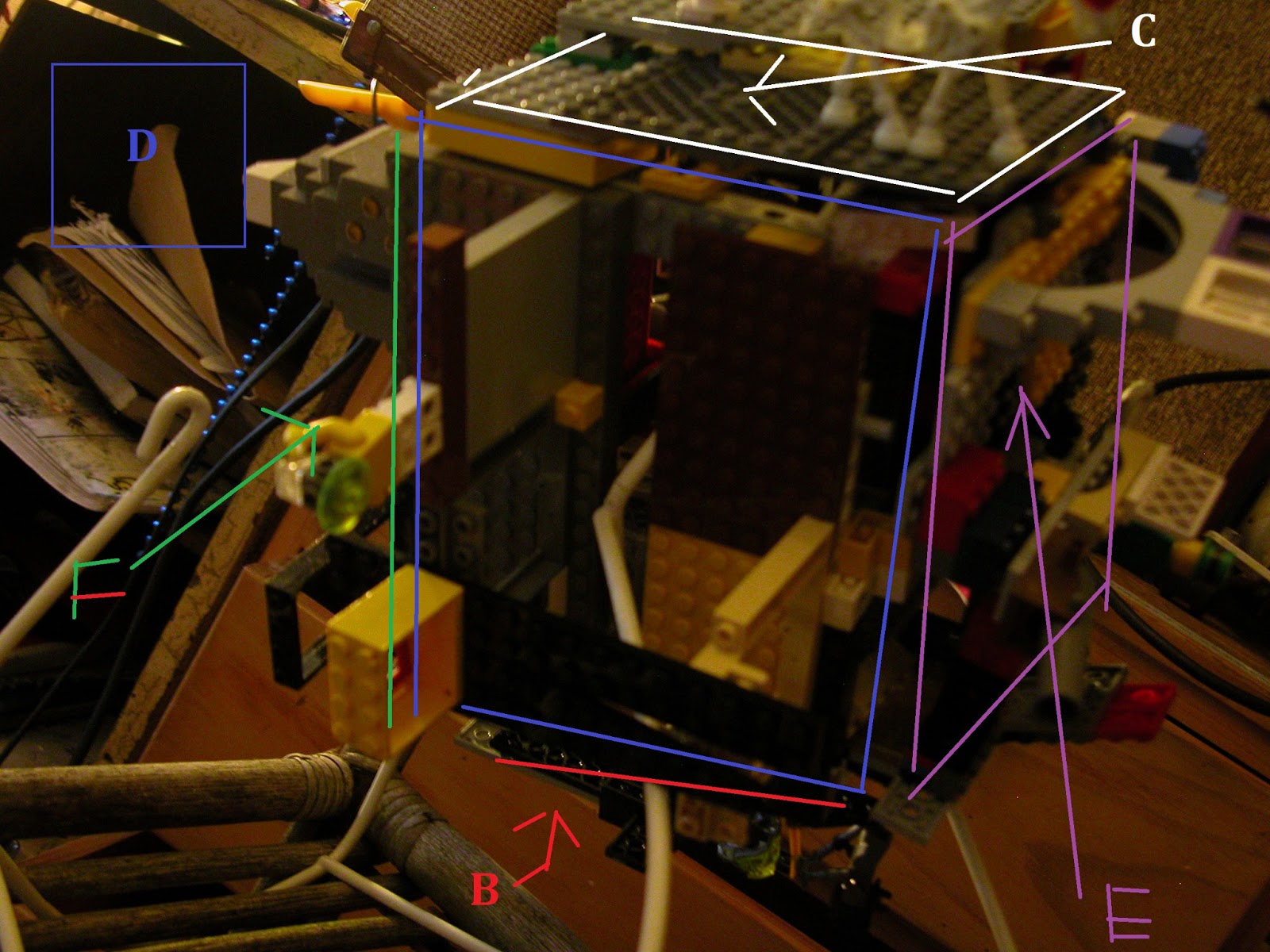 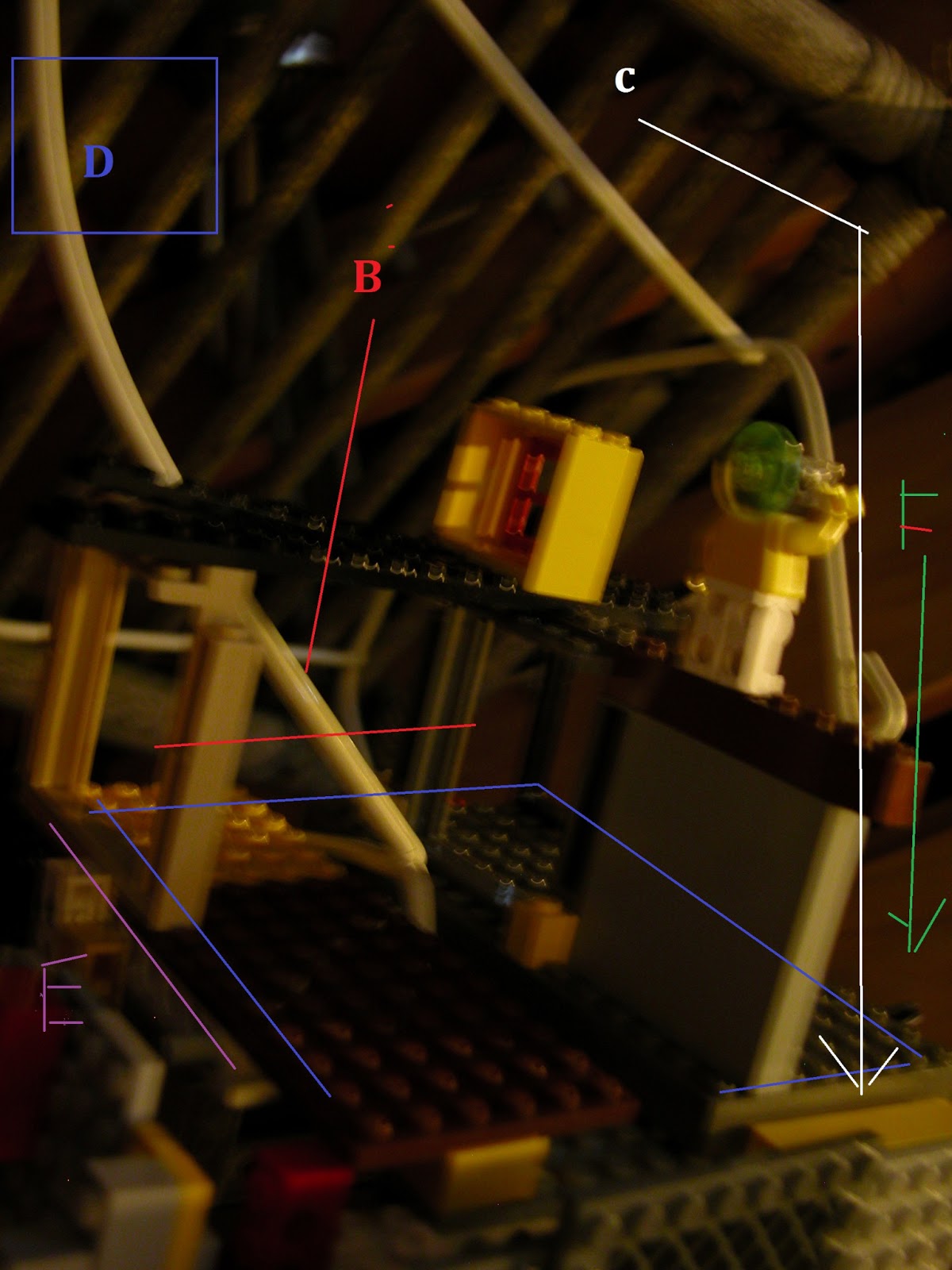 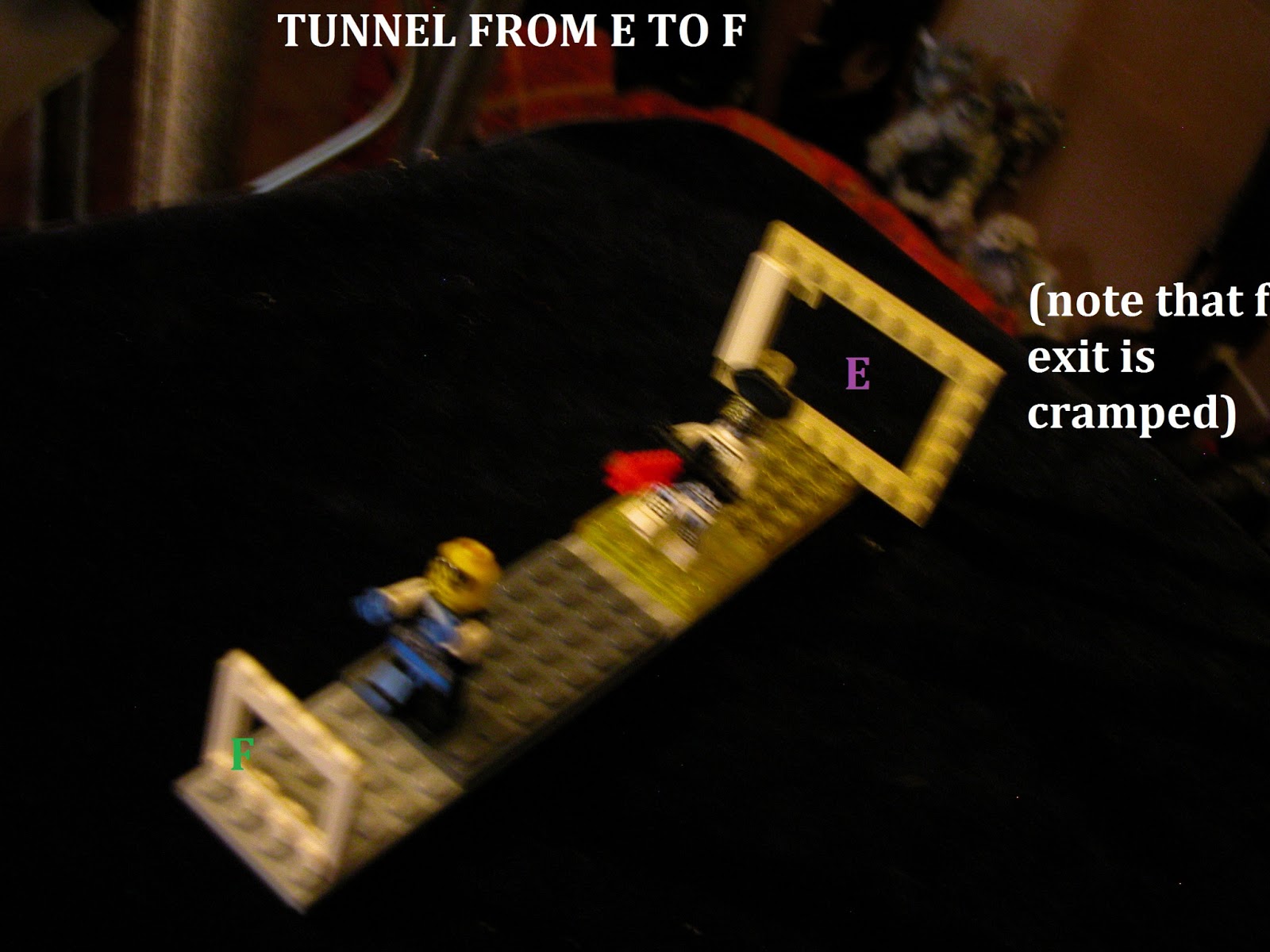 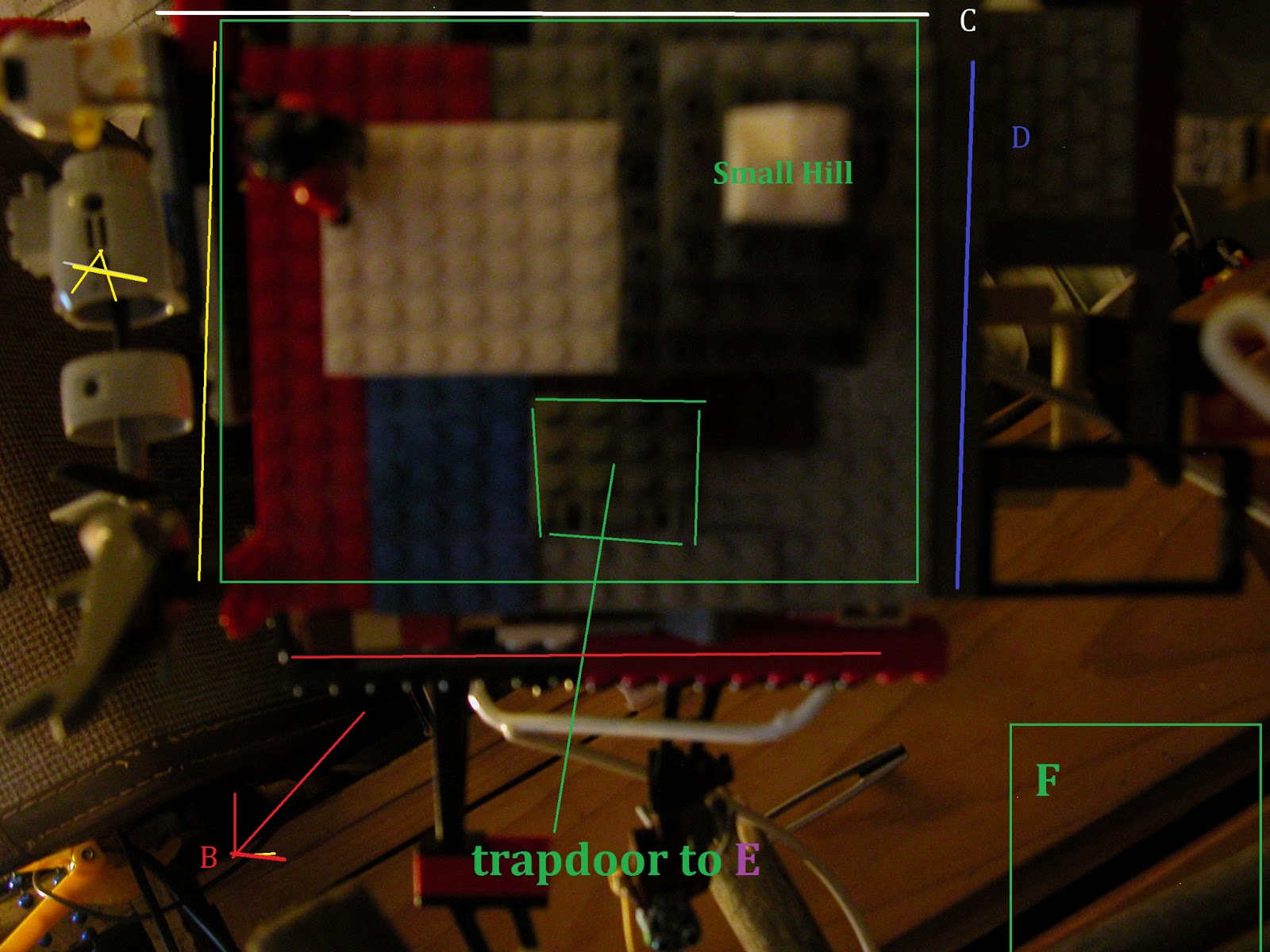 Anyway Team Bastard had the defender role and set to bear trapping , smoke braziering, scarecrowing, and my favourite move, over packing the cannon with all the powder leaving it for the other team to capture. What happened is Sir Ward fired laser beams down the barrel and it blew up and he nearly got nailed by the cannon ball.
And Team Implausible Denibilty took to making a walking tree siege tower and stomping around the battle field.

I didn't keep a record of the blow by blow of it , and lack the stamina to try and recollected in here, but the early precedent of allowing reincarnation/cloning potions to work instantly and the not-quite-deadness of the house rules mentioned in the last post kept this meat grinder going for far too long.

The early death of Noggin , meant that the allowing an instant  reincarnationing him via a potion to keep him back in the game seemed to be good idea. Like how many reincarnation potions did people have? MORE THAN I THOUGHT.  That plus the Cloning Potions , (all from from Vats of Manziran) meant that this meat grinder would proceed to churn far far longer that anyone thought.

Any way  it was brutal and I'm impressed that fun was still had even with it going on for that long and the bizarre punishings of game balance and house rules going on.

Other high lights include g.ms having to explain how an item works as its being used on their own p.c. Oh and the fucking code. Team Sneaky had a code, here is brief extract of it

I think a lot of these had been worked out anyway and fuck it I'm spoiling this one because it gave me such a head ache and it's gonna be a long long time before I run another one.

This was additional challenge , having to look up what the player actions were . IF google plus hangout had a "deafen" option as well as a "mute" it would of made this unessacery. I did enjoy saying "okay so you are still undertaking "richman protocol confirmed?" a lot it has to be said.

Stealth makes things so much more complicated, but like. so does icing (okay icing isn't complicated, for this allegory it's complicated icing) and thieves are doomed without it.

The Carnage Cube itself, was actually quite shit at letting the p.cs understand who was were. It was great for me though. Greater than just drawing up 6 grids with arrows pointing to where the sides connected? Well.. yes. Just. Except the cube immediately started falling apart because of my shoddy lego skills and the camera on the lap top not being good enough to allow a viewer to distinguish what the  fuck was where. If I had a better stockpile of lego , I woulda monochromoed each side with a different colour, for side identification  (because I kept forgetting which side was A and which was E) and to make it far easier to translate the visual noise into data.
Having a usb plug in camera that could be independently moved and a separate person responsible for moving the camera around at the request of the players is getting a little grandiose though. (but it would be awesome).


Anyway so that was fun or horrible or a mixture of the two (team knight won  though, kaspers punishingly cheesy combos gave them the endurance to out last the endless ambushes, traps, and schemes). 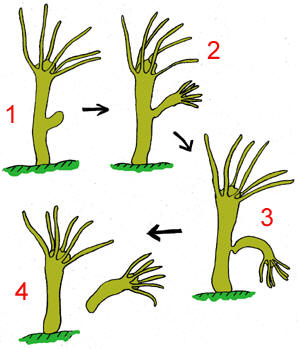 So I've decided to bud off the" draw pictures and sew creatures" part of this blog into to its own tumblr. http://raggedyassmonstermanual.tumblr.com/.
I will shout out here when I got something particular grand happening there, but in the mean time I can just do posts there that are "look at this thing, I did this" and keep the posts that are here fairly incoherently rambling meaty and useful. MEAT.