THE FINAL CASE OF DISPLACERKLAUS 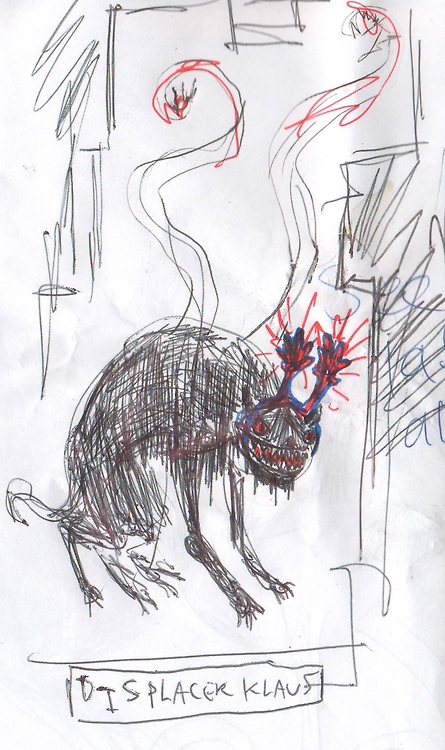 ONE LAST THING!!! SOMETHING NO ONE WANTED AN AW HACK

oh fuck you. Okay I will do the rest of this post so you don't have to deal with all that red and shouting.


So this thing , where you roll 2d6 and add an attribute and then:


it without complication and a total of 12 or


more is a critical success; you do it perfectly


to some extra benefit or advantage.


Actually makes for comedy gold. Like whatever dumb thing the players suggest actually has a decent chance of working but just with unintended consequences. Maybe it's like ouja board and with some players it drives it towards tense drama and with everyone I play with the spirits of violent slapstick start ectoting up the place.


But anyway I have sometimes/always impulses to play strange one off sessions of some particular thing and thought I could make something to use for when that strikes.


Okay so I have an idea for a game. I think about what everyone is going to be most grandular interested in , like how strong or faster they are the each other. Or how witty or whatever.


Write down 4 or 5 of them. Those are the stats. Either random or point buy , which either seems to make the most sense.

Those add to that 2d6 roll.


If I decide to use classes each class has a talent. Which is something everyone can do but that class has an edge at doing it.

Talent: SOmething you get a to roll the lowest dice again for. Like fighters doing damage (or attacking?) or rogues sneaking

and the class has a schtick.


Schtick: something you can attempt others cannot, like animal befriending or magic.


Also I like plot bombs. Which is a limited resource that can be exchanged for adding something to the campaign world. Pretty much it something to do with the character though, like representing a shady underworld figures range of contacts or a rangers obscure knowledge of mushrooms. Might still require a roll for success or complications


: 1 point that you spent to get something relevant happening in the game, like having a contact in town or having just the right gadget on you.Also can be thought of formal mechanic for when a player declares they are trying something and you didn't realize that is something people could even try in your campaign until now. More narrative games would have it more "plot twisty" and less "Schrodinger character abilities"


Now the hitpoints or mental health or whatever. Some games might just have one circumstance.

Circumstances: This might be health, wealth ,magicness, mental stability or social standing


. MAYbe a game that was a CAR RACING would have the position race as a form of hitpoints. So taking damage means you just would move from 1st to 3rd or whatever.


Some games would have simple damage others dice rolls or whatever.

when zero some stats are at a disadvantage, (roll the highest die again) and each negative you need to roll something (con or willpower check or ass-kissing) or be out of the game (temp or permanent)


HEre is examples of this. I'm is explaining all this badly because I have distracting with the housing and the giving up caffeine again, and I might be coming round to some of those wacky anarcho-primitivist ideas, so if this blog goes dark for a couple of months I'm prob killing and eating people or painting pagan runes on a sub-station.


con: (a formal declaration of rights health and wellbeing)


Schtick: Can use all weapons and armour. Especially extremely implausible big or batshit ones


Plot Bombs: armour / weapon crafting. With the right equipment you can make all kinds of booby traps , skin armours and jawbone clubs.


Schtick: cloud foot stance. All that running along rooftops and up walls shit.


Plot Bomb: Suddenly revealed to be actually hiding or disguise as ____:


Plot Bomb:retroactive theft (you can declare you have stolen something that you had the opportunity to steal, but didn't declare you were stealing it at the time)


Schtick: Can use spells via scrolls and tomes


Plot Bomb: rare and dangerous experimental wizarding/drug usage ("I will cure my mummy rot by eating this salamander heart" "I will replace my eyes with this basilisks eyes because I am a wizard!")


Knack: Obstinance (against everything from booze to reasonable arguments to head injurys)


Schtick: Stoneken (My dwarven sense is tingling! This is no normal igneous rock! )


Schtick:doing everything anyone else can do but in a shite elven way aka mary sue race


Money (used to buy stuff and sleeping elsewhere from the gutter. Reducing by day to day life, legal problems, social assassinations and spending it on stuff)

WELL THIS IS FUN NOW FOR ANOTHER EXAMPLE OF SOMETHING WITHOUT CLASSES AND EVEN LESS EXPLANS BECAUSE NO ONE CARES ALSO WHAT HAPPENED TO THE SYSTEM YOU WROTE FOR THIS ALREADY?


Dunno, I can't remember it all off by heart so it can't be that good right? Also making definite statements about the future is stressful.

Callousness (how not to care about open wounds and lost friendships)

Nastiness (knowing how to hurt people both verbally and physically)

Sexitude (how to use what mother spawned on you)


No classes just pick on of each, so these are things everyone can do , but you get an edge at doing it


Schticks allow you to do things or do things in ways that no-one else can:


Does Not Give A Shit


and choose a plot bomb


Extensive and sordid past

health, social standing ,and self esteem

Being reduced to zero in any of them means you can't act that session.


Okay well I hoped no-one enjoyed that. I don't know when I will use this. Lack of play and ongoing projects have made feel even more burned out than usual. Dissatisfied with everything etc. That bird is loud and looking at me funny. Atleast it has stopped raining. I kicked a hedgehog last night. Not on purpose. It was a dark and I did not see it. We have bumble bees , hedgehogs , possums and rabbits here because some thought this should be the beatrix potter colony. In another 100 year feral cats will be as big as panthers in australia. If I start making hedgehogs swim will they become pufferfish?IT IS THE SEASON
Posted by scrap princess at 00:03