Hardcover Version of Fire of the Velvet Horizon

PDF Sooo this took awhile , mainly because it took so long to get shit send to new zealand and then problems with the physical postal address and courier post and initially trying to get it done through blurb  .
Blurb, while great interface and quality , don't have an a4 size. They do have some fun square and landscape sizes , and those were tempting , I went with peecho instead.

And while lulu is fine, it doesn't have the paper weight that allows super black and stand-out colours.
Lulu is 60lb while peecho  I think  is 110lb (they list it as 200 which I assume is gsm so that's 110lb because 200lb is crazy) and blurb 80lb to 140lb.
I.. barely understand any of that though?


Lulu also uses ftp file transferring for files over 300meg and this has taken days and days of multiple failed and resetting upload attempts to get it there and it's fucked and was a major reason for going else where.

I mean it's entirely possible I could get the pdf smaller  (the mac Preview default program is worryingly good at resaving pdfs at smaller sizes with no obvious loss of quality) but I don't know what the fuck I'm doing and I don't want to the horror of having to then go through the pdf to make sure nothing has gone wrong, then test print it out and wait for that to show up and then when it doesn't try and track it down and then finally get it and go through it and this has take over a year of doing this , I'm not kidding.


Blurb has store pages , while Peecho sadly lacks them, so I have to awkwardly make one on here , all they give you is BUYNOW link like so くコ:彡

so if you want to do some absurd over illustrated monster check out both peecho and blurb.

Now that this hardcover is live , I intend to NEVER update this book again. It's reached some kind of event horizon where any improvements I make cause an equal amount unintentional mistakes that need fixing. It is done. I have reached the limits of my limited competence. No more.

COOL STORY SO THE BOOK?

It's sexy hardcover version of the book. It has like 4-5 additionally appendix pages , which do not justify buying one if you already have the softcover. The text is bigger and clearer and considerable effort has been made to get the text out of the gutter. So there's that. 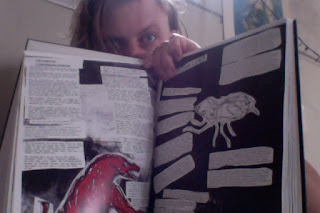 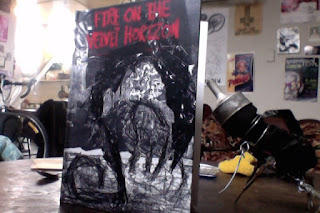 there's some (much) better photos here

(also did you know Patrick sleeps in a bed and not a rat-eaten blanket on bare floors , I am surprised)

And let's just make this a super commercial mega-mix,
first up : CONTESSA. Contessa is the best, they do pro-active diversity and representation in gaming,  here is their
site
you get t-shirts there and/or support them directly, or find out how to register an event with them for gencon, which you should totally do if you are a lady or otherwise a member disproportionately underrepresented group in gaming and want to REPRESENT.


PEOPLE I KNOW THAT AND HAVE PAID ME MONEY TO WORK ON PROJECTS BEFORE AND THEY ARE DOING KICKSTARTERS RIGHT NOW :

Zzarchov Kowolski (who funded the original Deep Carbon Observatory , and paid me to illustrate  this )
is doing a board game,  I know nothing about boardgames I can see literally nothing about it other than here's kickstarter

Jacob Hurst (who paid me to do some small illustrations for this) has been doing this Swordfish Island thing for years and it's basically done , it's just funding the print run. Here's the kickstarter it will explain everything.

ALSO? I'M SORRY FOR PLUGGING STAB-CITY , IT FOLDED LIKE A DAMP CRANE, DUNNO IF ANYONE GOT THEIR MONEY BACK , I HOPE THEY DID

crikey all that commercialness has made exhausted tooo exhausted to put some actual game content on here, hahahah

ALSO
IF YOU ARE GOING TO PUT SOME FAKE BINOMINAL NOMENCLATURE FOR YOUR MONSTERS 1ST EDITION MONSTER MANUAL STYLE YOU FORMAT IT LIKE THIS
Draco caustiscus sputem NOT IN ALL CAPITALS NOT WITH ANYTHING OTHER THAN THE GENUS CAPITALIZED AND IN ITALICS AND/OR UNDERLINED
So Draco is the genus , caustiscus is the species , and if there's a 3rd word it will be a subspecies (so in this case sputem). In this case (1st edition monster manual dragon names) it makes little sense for their to be a subspecies listed unless there is a shit load of slightly different black dragons. If there was going to be a subspecies it would be likely that Black dragons would be Draco caustiscus caustiscus as it's thought of as the most representivity of that species. There could be an argument  that chromatic should be the the species with each of the colours being a subspecies (So Draco chromaticus sputem for black dragon).

However, there doesn't really seem to be any hard and fast rules about when to do species and when to do subspecies and it's more about people's careers than an exact measurement of genetic difference.
Also while botany can have cultivars ; kinda like a subsubspecies , zoology doesn't, and doesn't formally recognise "breeds" , which are the zoological equivalent of a cultivar , the closest thing is race , which is used fairly rarely and informally.

In regards to the correct way to have latin suffixes, well yes there are all kinds of rules about which to use depending on the gender of the root word, but it's been barely followed in actually biology for like a century , so fuck it. Like there's serrata and serratus and it should be standardized as one because the suffix is depend on the gender but no.

Some suffixes , however , modify the word , so -oid or -scens.
-oid means "like a" and -scens means "an immature version of"

To make it even crazier there's a lot of greek used , and  latinized greek. Like -oid for example.

Email ThisBlogThis!Share to TwitterShare to FacebookShare to Pinterest
Labels: $$$$$, commercial break, Fire on the velvet horizon, kickstarter, other peoples things