PDF
That was likely my most favourite one yet

As I commence writing this there's 10 hours on the mercantile clock in which to secure a print of Deep Carbon Observatory  ,
after which you'll have to find them in shops or via mail order, methods both adding a little more uncertain that the regular irregular amount of uncertainity. 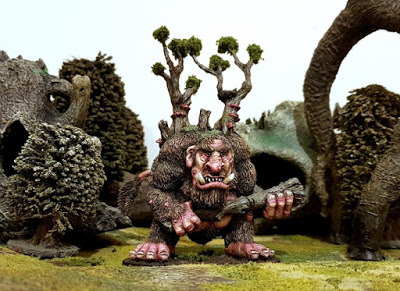 Any way we have this image to response to
He is a Buggard Groundskeeper, specifically Mister Pigs .

The Seelie like other nobility amuse themselves with a rich variety of hunting practices, and thus need grounds and lands kept well stocked for them and them alone.


Thus they make use of buggards as groundskeeper, troll like brutes that make up for their (considerable) lack of intelligence with  immense and fierce tenaciousness .

Their minds are like single angry wasp held in a hand, an endless pricking their mind with suspicion and hatred.

Not a single leaf or stick can be moved without them noticing it on their rounds, their only pride and esteem is in their ability to maintain their grounds from poachers.


Their stout legs can pump remarkably fast , easily keeping up with a horsed rider, and adding to that is that thickets and various undergrowths let their master pass unimpeded , while seemingly rising up to snatch at the Buggard's quarry.


A Buggard will armed with a crude bunderbuss like weapon , packed with elfshot, resulting in the flesh peppered with painful wounds that won't heal until the elfshot is removed.
However when someone  tries to dig out the elfshot it will bury away from the chirurgeons probe , increasing the damage done.

They can only be removed by calling them out with certain songs which are known to very few mortals.
Those that do know them are very cautious about singing them , as to do so risks the seelie hearing and claiming the singer as their own.

Additionally some struck by this elfshot will have certain strangers come looking for them, not the Buggard , but his masters. If they find this marked trepasser they will ensourcen them into an animal form (but leave their ability to speak and more specific to plead) and put them in the grounds as use as a game.

Poachers don't escape the Buggard will be skinned and eaten ,  buggards being found of human skin for sheets and furniture covering and their cottage will have any surface sittable being dressed as such.

If the Buggard decides you are merely trespassing (as you seem to have no means of taking game nor the smell of it on you . The Buggard can smell if someone has held a bow or spear in the last day , and if they've eaten a game bird or beast in the last month)
and the Buggard is not hungry (1 in 3 chance) , they will be sounded thrashed and kicked out .


If the Buggard is hungry , the victim will be bleed, skinned , dressed and eaten.
If the victim can make a case for their ability to sing , tell jokes or storys, they will be kept captive instead.
Nearer christmas time the Buggard will have atleast one captive that they fatten up for the winter feast.

The other danger is that the Buggard will be on orders to kept the woods stocked with human game.
In which case you won't be allowed to leave as the Good People wish to use in one of their specialty hunts , a few of which are listed.


1. Babes in the woods:
Children or youths are left to wander in their woods, and 1d12 Folk attempt to use illusions to convince them to lie down and succumb to hypothermia . Each of the court can use an illusion once to trick them and once to get them lost . If the victims manage to find their way out, they will be let go and often find money for their rest of their lives, providing they don't talk ill of their hosts, in which case they will often find snakes.

2. The questing knight
The quarry is one on a quest (or order to be on one by the Buggard) , the Seelie take turns attempt to use the quarrys moral failings against them , if they fall , that Fellow will turn them into a pet.
There will be 1d4+2 tests before they are left to complete their quest.

3.Vengeance Hounds
Someone is chose with guilty past, they will be pursed by the People astride horses and with hounds, each hound having the face of someone the quarry wronged. They will be relentless pursued , being able by time only by expressing true remorse to each hound in turn. More likely they will be torn apart by the hounds , and only their heart, tongue, breast , hands or genitals (which ever suits their crimes)  kept as trophys.

4. The Duel
Some capable of defending themselves is chosen for this hunt. A single member of the Lovely Court  will hunt them down aimed with a bow , a dozen arrows, a thorned whip , and a long glass knife.
They must use the knife for the final blow or be seen as failure by their peers.
The quarry must make do with whatever they can make or find.
If the quarry survives , a  (possible as yet unborn) child they have who shows martial promise will taken on as a squire by court as reward.
If the quarry successfully kills the Hunter, all debts , promises and feuds of the Hunter now belong to them. The hunter will then be reborn with a new name.


5. Armour of Gratitude
The quarry is given a day and night to earn the favour of as many forest beings as they can, and be given the ability to speak to beast, foul, reptile, tree and fish .
After the time is up the Reasonable People will seek them out, first with hounds and spears, then with crows and knives, then with flies and nets.
If they manage to escape , they will keep the speech ability. However if they speak ill of their hosts of this time their tongue will turn into a burning coal.


6. Blindman Bluff
Someone is either chosen for their blindness or made blind. The Folk seek them out with spears. however the rules of the game are that if the quarry calls out what they are within earshot of the Golden Host, then the Host have to treat them as that.
They  must use the correct tool/weapon for the killing of their quarry.
So if the quarry called out they are Tree , the folk must leave and come back with an axe.
Someone with average ability  to hide and detect will likely have the Folk find them 6 times before the game is up.
When the game is finished they will become what have last stated themselves to be.


Now what will possible be the last image of this game, we have twice had elephants, so lets end in thrice elephants: 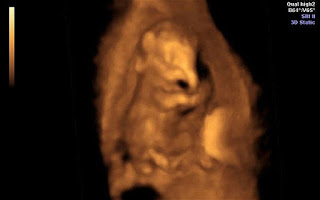