PDF 29 hours to go on the kickstarter of Deep Carbon Observatory by the time I start this post , and

This fellow is a Halcyon Host.

Someone whose psychic potential was strong, but they lacked the focus and will to force the world to obey them.

Instead a deep unhappiness and self belief saw all their potential pouring inward.
Their predisposition for daydream and escape into a safe and golden inner world becomes hypertrophic with their psychic power.

Resulting in an ability similar to "Dream Travel" but instead they fold themselves inward , in a grotesque but somewhat comical implosion , and travel to their innerworld.


Unfortunately they cannot sustain themselves  there , and must seek employment .

An underdeveloped physical form, a lack of ability to focus on any external task, little to no charisma, their powers lack the range or power of a psychoporter , there's only one real path available.

That of the Halcyon Host, turning themselves inside out to create a portal to a sentimental inner world .
Their patrons are those with a taste for the simple and excessively sentimental , tastes often found in the totalitarian and emotionally stunted .

So they are often are hosts to those that have little regard for them, barely seeing them as anything other than a door, plopping along like poison toads through the little palaces and soft lit glades .


And now Patrick , what is stirred up by this:

A TALE OF THE WORLD WINDING DOWN 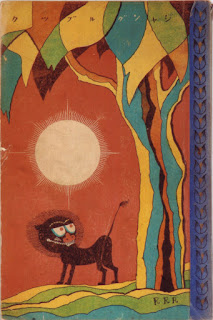