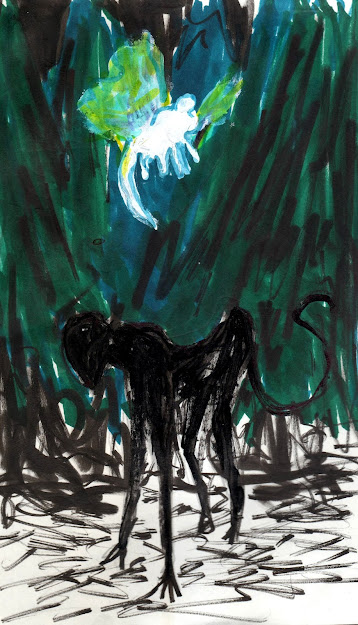 It's been a while but I'm back with some  sweet, sweet, <default content>

Poisonous quadruped that dwells (and multiplies) in mirrors

Of the handful of monster that I think needed another pass this is the one that I think needed it the most. It's sort of awkward between being a mystic mirror beast, but not actually being that mystical .  So I'm going to expand on it now , giving 6  new abilities of the Corbeau

1. The Corbeau will stalk its prey via reflective surface. It will appear only in the reflection and not  outside it until it chooses to. It can then appear anywhere that was reflected.  So someone who spots one moving in the reflection will likely look in the surroundings for the creature , rather than the mirror itself.  Subsequently this means no Corbeau casts a shadow unless its another Corbeau. (see number 4 for an expansion of this)

2. The encounter/use the description invokes is that of a mansion abandoned with wild stories about what befouled. Then inside the mansion is a Sallow* of Corbeau stalking the party through multitude of mirror. The wild stories of the Corbeau could make the party over estimate the danger or powers of the Corbeau , but the discovery of the Corbeau as simple ( but cunning) beast might prove anticlimactical, if none of the suggested additional powers are added.

3. One such additional ability is if a Corbeau is lurking in a mirror and the mirror is broken , it multiples the Corbeau into a number equal and proportional to the fragments  resulting.  So if you wish to deny a Corbeau a perch to stalk and spring from , you would best be sure their wasn't a Corbeau hiding in the reflection. Newly created Corbeau are extremely hungry and will have mere hours to find subsequent food before starving to death. They will often turn cannibal on each other if no other food is present.

Still water doesn't have such a property as it doesn't break into clear shards.

4. A Corbeau can create another Corbeau by looking into a mirror or reflective surface from dawn to dusk.  They will only do so if food seems plentiful enough, so not to risk having a rival or even  a predator.

5 Corbeau cannot break or harm a mirror or reflective surface. In the case of still water this means a Corbeau can walk across it as if it were solid glass and a Corbeau falling into a still pool will result in it being broken across the unmoving surface of the water

6. If a mirror contains a Corbeau and another Corbeau is within reflective range, the Corbeau in the mirror will be compelled to perfectly mimic the Corbeau outside the mirror. Any other Corbeau lurking in the mirror aren't compelled in such a way, but if multiple Corbeau are in reflective range of the mirror then they will. There is also a limit to how many Corbeau can pop into the other side of the reflection, that being one a round. But once the amount of Corbeau outside and in the mirror reach an equilibrium, the compulsion will mean the remaining Corbeau will be trapped in mimicry until one/some reflected Corbeau leave the reflected range.

1. Odd disappearance has lead to Mirror Merchant believing one of his mirrors is cursed but he can't work out which one it is . (one mirror has a Corbeau)

2.Mirror with Corbeau in it as trap, alternates with Mirrors that are dangerous unbroken (these render a viewer paralyzed as they stare at the reflection)

3.Dark gruneous pine forest with multiple pools for Corbeau to lurk from (pretty much in text)

4. Mirror given as a gift , really an assassination tool, a lurking Corbeau in a mirror won't show up as magical.

6.Mansion guarded at night by turning around the paintings. Each has a mirror on the back , and a Corbeau in at least one of them.  Just before the household staff being their morning duties a goat or stray dog is let loose in the hallways for the Corbeau to catch. It will then withdraw into a mirror with its prey and the  staff can safely turn the paintings around again.

*"Sallow" being the collective noun of Corbeau

1.Giving them an additional ability of eyes rendered blank from their attacks lose any gaze attacks , so they become weapon against monsters with a gaze attack (Beholders, Medusa) . Then a party in process of making preparations against such monsters , might go off to the swamps festooned in the brightest colours they can source, ready with nets to swing as soon as their garments start bleaching.

2.Chirurgeon who do a lot of amputations could potentially create a market for Colour Monsters. As the area they drink from becomes permanently numb they wouldn't be that suitable for general medical practice. But for an amputation, this matters not. However to keep a Colour Monster might require expensive pigments regularly obtained and it might serve better to commission adventures to source them before a military campaign and then destroy them afterward.

3.Potential City Encounter/event of Colour Monsters obtained for the above purpose getting loose and running amok creating panic as people cover themselves in the blandest garments they can manage. The would-be re-captors of the beasts would need to follow a trail of invisible formerly bright things and/or create bait of the wildest colours they can find.

4. A bizarre fighting style "the Glass Arm" , whose practitioners use long glass blades and render their fighting arm invisible via the Colour Monster. Such a follower could make for a distinctive mercenary, henchman , duelist or assassin.

5. Particular long wet seasons in the Melanic Moors can cause an excess of the brightly coloured flowers the Colour Monster is want to feed upon and subsequently creates an boom of Colour Monsters. If the following season is not as long , the available food runs out and swarms of Colour Monsters roam outside the swarm seeking colour to drink, resulting in a panicked population adorning themselves drably and donning mesh over their eyes. (pretty much in the text)

6. These swarms can result in a creature , as would be encountered on a random encounter table (Crimson Contradodron for example), having been previously attacked, and is now invisible , numb to pain, and likely confused and enraged.