HORNED DEVIL AND BETTERISHPHOTOS OF GERYON and then some campaign malarky 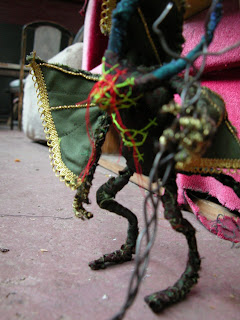 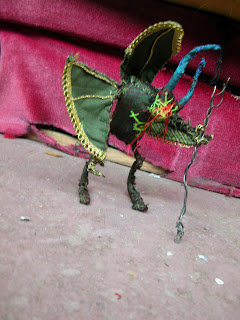 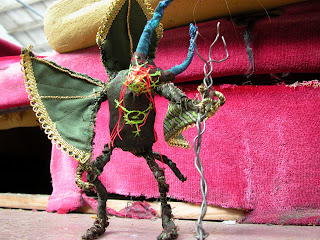 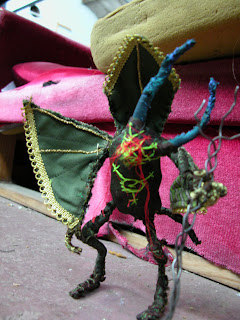 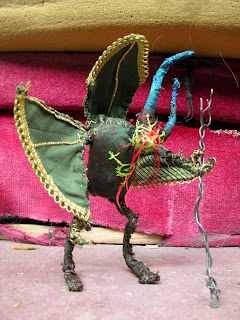 And I retinkered with Geryon, made his mouths look more like anus: 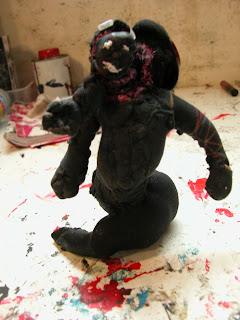 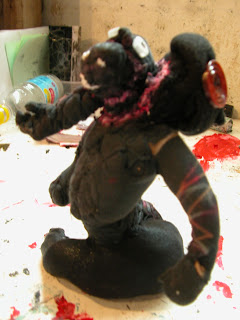 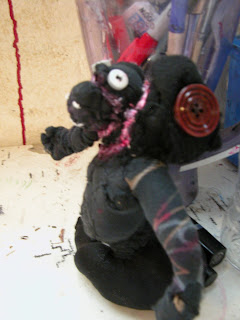 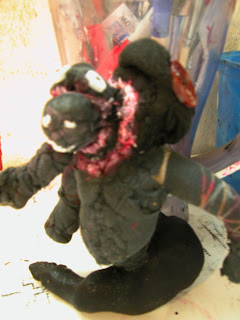 I've decided I'm bored of the alphabetically progression, and now will proceed randomly.
Rolling a d100 and counting down gives me..
A mastodon!
A mastodon is what I will make next. Unless anyone was so very exciting about seeing the ice devil?


Also here's some half-assed encounter tables I wrote last night when I couldn't sleep for your gleaning/amusement/derision
Decide on some arbitrary chance of an encounter
It happened?
cool,

1-3 is some kind of notable wild life encounter, like a what's that rustling in the bushes psych out, a game animal wandering dumbly in plain view, or like "aw isn't that bird amazing/an omen of doom"
4-5 Is a potentially combat type thing! phwoar! See tables below!
6-Is some kind of environmental hazard/obstacle. Not necessary appropriate to the terrain depending on your whimsy quota.
7-Strange! Mysterious ruins! Ominous geo-glyphs! Unidentifiable carcass(strangely mangled) Inviting statues! A voice in the dark! Spooky lights!
8-Freebie! Something benevolent, like a drinking water, a half picked over caravan still lootable, beneficial herbs , a nice safe cave, etc.

no, really, I couldn't sleep
this could all be so compacted..

Hunting, they are hunting WHAT
1.why, something big and dangerous
2.some unfortunate intelligent creature,for EVIL reasons
3.some unfortunate intelligent creature,for GOOD reasons(like justice, or um.. to tell them their mums not dead?)
4. some ordinary food animal
5.some harmless but cute and rare
6.something complete bizarre , for reasons of DARK MEDICINE or PROPHECY or BECAUSE ITS STUPID LOOKING AND SHOULD DIE

Lost!
1.and their home is very near
2.they don't have a home
3.they are very far from home. And sad.
4.From somewhere impossible!

Guarding!
1 herd of animals
2 children playing
3 others of their kind gathering something
4 A fresh kill
5 a entrance/location
6 a wounded comrade

Gathering! its totally different from hunting and searching!
1. Medicine! herbs and shit
2.spoils from a battle site
3. plants/fungus/seaweed for eating
4.resources to build something out of, like a bridge!
5.some kinda fancy resource  like  dyes or clays or flowers MOTIVATED BY CULTURE
6.small edible animals caught in snares or nets

Travelling!
1. because they are gonna trade something!
2. because they need to buy something!
3.they are going home!
4.migrating!
5.to aid another group in war!
6.for some kind of ceremony reason, like attending a wedding or a funeral

Wandering! like traveling but you have no idea where you going and totally different than lost because you know where you've come from
1.Vision quest
2.exiled!
3.Bored!
4.looking for a new home!
5.crazy!
6.trouble seeking!


Oh and here's a brief description of those monsters mentioned above
GREAT DOGS
a massive gangly legged english mastiff, with glowing eyes and spittle. Hunt in eerily silenct packs.

WHIP TAILED LIZARD
its a great big skink, with a tail, twice its length, that tapers to a impossible point. Could slice a mans eyelids and he wouldn't know it until he tried to blink.

SKY TICKS
Ticks that swell up with air and drift up behind you like dreadfully balloons, then exhale , to ram into you and gorge on your blood. Only attack from behind, and dart for cover if you catch them sneaking up on you and turn around. Only to resume stalking you, the moment your back is turned, like some RETARDED CHILDREN'S GAME

TRI WOLVES
3 wolves joined together jowl to jowl to jowl, a demented triangle of fang and limb, alternating the bottom wolves in mid-charge, thus having a bizarre side tumbling movement even as they close the distance to your tender guts

MURDER SPIRIT
A floating gel like thing,its centre glowing with mandalas, it waves its mockery of limbs at you and makes you bleed with its stare


AMBUSH TURTLE:
its a snapping turtle that hides in sand dunes. yep.

TUMBLE BALL BEETLES
a mass of fleshing rending beetles that travel by locking limbs and forming a large tumble weed like ball. When the ball collides with meat, the structure collapses in a feast of agony!

GLASS EEL
A translucent eel, the thickness of horse's leg, diving through the sand. When it brushes against you, its smooth skin is so eerily sharp, it has disappeared beneath the sand by the time you blood starts gushing out

WENDIGO
The terror of the mountains, there furry white forms appearing benign form a distance, but with their leaps are horrible, suddenly covering 100 of metres in seconds, there black furless skulls snarling open with a mangle of teeth and gore. When they land, they can do so as lightly as snowflake , or with the sudden jarring impact their velocity demands. It is said they void waste on the wind , which entertains the mind in howls, and there it corrupts causing cannibalism and infanticide.

DAINTY KILLER
a glistening shimmering wind born jellyfish, its dangling ribbons cause paralysis. It will then carry the paralyzed victim to a great height and drop them.

PRESERVER
A hulking lizard thing , squatted on 2 legs, like a age crippled man, with long thin spines its height again crowning its head and back. Its named for its habit of impaling its kills on the end of its spines to wind dry. It cries salty red tears, which it anoints these bodies with, in cruel mockery of mourning, the banal reason being the tears deterring flys.

VAMPIRE FLY
a fly the size of a man, its back alive with squirming maggots. These are dropped in swooping dive bombs, the maggots latching on , and sucking blood. The maggots suck as much as they can in a short amount of time, then drop off into the water, where they rapidly swim away to begin metamorphosis into the adult form.

HALF STUCK MEN
unfortunates that have subjected to a cruel dose of slurring flux radiation, they randomly fluctuate between moving Slow, Hasted and frozen (and invulnerable) in time. They appear to be maddened by this strange agony that drives them to kill! kill! kill!
Some groups of halfstuckmen are synchronized, freezing , hasting and slowing together. Others deviant individually in time.

CYROS
a snake tracing figures 8 in the air, surrounded by a blue, freezing flame, it drinks heat and is to be feared

GLUTTONOUS
a pig that when fully opening its jaw, nearly splits in 2! infamous for one gluttonous luring hungry sailors by with its innocent piggy looks, the other gluttonous lying in wait close by.

RIDDEN
a large sword limbed arachnid that latchs on to the back of a monkey, punch its fangs through the eye sockets and usurping the monkey as a macabre steed.

HEAT RAY SCORPION
A large scorpion, with in place of the stinger, is a crystal lens, which with it focuses the suns rays in a killing beam.

DRAPING DOOM
a sea anemone disguised as a tree

MUD GIANT
a slime mold colony that animates a mass of vines mud and branchs in looming form. It rears up like a wave and crashes down bludgeoning and drowning. Anyone played moonstone on the amiga?
http://www.youtube.com/watch?v=_5CZ6TqCgps

WHIRRING CACTUS
those big flying things in the hyrule plains in Zelda: ocarina of time

SAND ANOMALY
a malevolent point in space that whirls sand around it, killing by abrasion and feeding solely of the last breath of intelligent beings

ROCKETEER TRILOBITE
A trilobite the size of a fist. When startled takes off at great speeds. The danger is that its half blind, the direction it flees in is random, and its quite capable of punching straight through a tree with its speed. It can be placated with soothing voices or funny dances.

PIRANHADON
A piranha evolved in a large ambush predator. From the book below

CARNICTUS
did you see king kong? yes, it was truly awful, but the scene where the worm thing sucks a guys head off? Thats a carnictus.
also if you see the The world of Kong in a 2nd hand book shop, get it. That turd of a movie had quite a amazing amount of detail done on skull island.

MAULER FROG
a frog the size of a small dog with a iris arrangement of teeth , jumps and takes circular cuts of meat from prey, ala cookie cutter shark http://en.wikipedia.org/wiki/Cookie_cutter_shark

CURMUDGEON
A shark so disagreeable it grew legs and chases people up trees.

So I think I excitedly talked up some shit about doing a bestiary in the style of a mixture of field notes and Pliny the Elder level failed research.The kind of nonsense above would be what to expect. The drawings, similar. If anyone would actually like to see this, I'll bother to get it done and scan it and put it here. Otherwise the players in my campaign will be the only ones unfortunate enough to be subjected to it.

UPDATE:
if the bestiary was to have stats what system do people prefer?
Posted by scrap princess at 09:30