Wands I like pointy boom stick I cannot lie

PDF
OH look fuck it Imma on a band wagon.

I like wands. Wands make me think about pointing bones http://en.wikipedia.org/wiki/Kurdaitcha


and this I wrote earlier:

"So like wands as a raw looking lens of intention. A long needle of bone wrapped in hair and rotten teeth, a children's chair leg studded with absurdly dainty nails, a fat polished small branch wrapped thick with plague bandages. A concentration of intensity in the most basic of tools ; a stick , a psychic lever. The action of pointing is primal, the fear of being chose, cast out, selected, marked, no longer safe in a crowd but alone, the malignity of the world bearing down on you, you alone.﻿"

But okay the challenge via Zak Smith is "do they look cool to use?"
(and also, could a gun, staff or any other object look cooler in the wands place?)

I've been trying to draw what is going on in my head for cool wand useage but I have nothing that's not "scruffy people gurning and gesturing wildly" which is not quite what I'm thinking of.

(
This is all gonna be a 100% in the domain of subject-to-taste. Do I need to say that? Some how, I think I do.
Also wand is being defined here by me as "something smaller than a walking stick , that is longer than it is wide, and does not immediately look like something that would be your first choice in a knife fight"
)

So the basic harry potter wand position is holding it in the palm, the base of the wand not extending too far past the fleshy base of the thumb. If you were to pass someone a candle this is properly the hand position you would naturally use.
So it lacks a certain "RAH I BURN EVERYTHING YOU ARE , WERE, AND COULD EVER BE NOW" moxie.
Now there is a variety of mutant a-topical wand movements but still using this hand position , going through my head right now, I'll list them
>The delicate "conductors" baton movements that contrast horribly with the violently throwings being telekinetically delivered on the target. Ala That wizard vs the Other wizard in Lord Of The RIng.

>as above, but more "calligraphy brush", movements corresponding to sudden wounds blooming over target. Possibly reverse movements or stitching motions for healing or silence/blinding
Would a giant sewing needle be cooler for this? Well yes and no. A giant sewing needle is awesome, but somehow a giant sewing needle that sews at you by sewing seems a bit of anti climax. If a horribly thin sliver of bone or a mummified aye-aye finger did this effect , that is much more satisfying to me. Like "oh shit what is that horrible thing that warlock has pointing at me I don't know what is going to happen but argh"
A giant sewing needle should sew stuff but maybe sewing peoples shadow together or joining locations in space or sewing up a pocket in space to hide something. To be unpicked later, releasing a trap?

>As generic brand wand , but the wands movements are drawn, as if the the wielder was pulling the wand through tar or meat, a sense that the wand tears hard against the very physical nature of reality.

> Slow deliberate cutting motions directed on wielders own body, causing emphatic effect on the viewer (ie you start bleeding). I like a throat slitting motion here.
Now a magical knife could do this, but again it's too obviously packaged. A magical knife would be better used cutting out your own internal organs which then grow and monsterize and implausibly savage people. I like the mental image of a nondescript branch doing this effect.

>waving around the wand like a maddened lunatic bedeviled by wasps, but the speed of the movements speeds and slows erratically

>The old "flick this shit off that stick" . Could be done in a martial artist avatar kinda way. Waving a weapon around and shooting fire from it is kinda unwieldy  but waving around a weird magic object in a violent and graceful fashion with the spell released as if flung by it is workable in my head.
The flick this shit also works for me if the wand is stabbed into the earth which then turns into lava, caustic tar, acid ooze or whatever and then removed and flung at the target. Also the "wave a magic missile into existence like a sassy teenage witch with a sparkler". Which maybe too camp, whimiscally or fruity for your tastes. Me I love a crazed limp wristed eunuch underling squealing and flinging soul spiders from their wand .

>wand has snake head, snake head shoots lasers from its eyes. Is he-man style, which may or may not be a deal breaker here. Also the argument "but a snake staff or a goat skull headed staff shooting eye lasers is just better" is.. correct. Okay the wand is a horrible glass centipede thing that is coiled around your wrist , penetrates your veins with its legs, and uses your blood to power its eye lasers.

Okay so other ways to hold wands:
Well here is people having a roman candle fight

which may or may not sell wands to you.
I think that some of the "just pointing this thing" looks dumb, but some of "oh shit I can't believe explosions are coming out of this thing" holding is perfect in my head.

I think wands look better in my head if they are just smaller than a walking stick (like a life preserver) and about a 4th of the wand's length runs along the inner arm to brace it. SO not a harry potter dire-pencil.

Also for your comptemplations a caduceus style wand that is presented up-right and the snakes then laser eye the shit out of everyone in your way.

Oh I feel that the only really acceptable crystal for a wand is the whole thing being carved out of obsidian.

Oh and so there is this game called Legend Of krondor you will need a duck and and it was a p.c rpg but yeah the point is the description of enchanted bolts for the crossbow mentioned that you could tell these were magic because they looked like they were made by someone who had no idea how to make a quarrel.
I love that. I love the idea of "vandalized function" , like objects that mock the actual way things works and work anyway by usurping that function by mocking mimicry. Wands that look like the worst dagger ever, like a glass spindle, or a dainty childs mace with insanely complex star bursts and halos of spikes, barbs and razors.
A modern day wizard could have no time or care for engineering and just duct tape gun like things together, wrap it in goat skin and then go and blow peoples faces clean off. 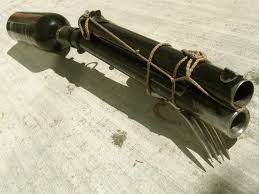 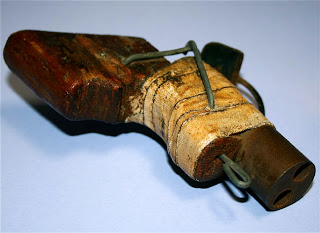 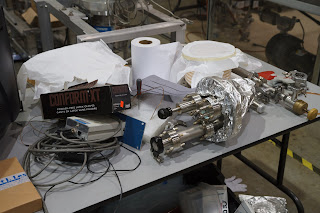 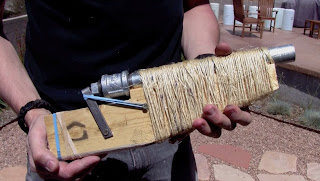 Actually I think some these actually work as guns, but yeah. If anyone finds a good picture of a goat part using kludge gun , share please!
Posted by scrap princess at 23:35