Wait those monsters are awesome

PDF so someone on tumblr wrote this
"
its 2016 and the d&d franchise has finally run out of new monsters. the creative team looks dejected.
“moss… hog?” says one tremulously. the others perk up.
“crime bird?” says another. there are audible gasps.
“sludge dragon!” another shouts. “lawful good ameobas who only eat copper statues!”
“filthy halfling! like a hobbit but covered in shit and trash.”
“sexy lady made entirely of shields. neutral evil. shield maiden.”
“dinosaur witches” “we’ve done that” “yeah but these ones are called Tyrannosaurus Hexers”
“piss pixies!”
“b… bloblins.”
the gang orders a pizza as jubilation reigns. d&d is back.

And it was a merry jibe against the perceived absurditys of game writers.

Which is all well and good EXCEPT IT'S NOT because those monsters are awesome. And damn it better material happens when game writers care not for absurdity*.
And most often they do care so much so, and lo they stick to the accepted fantasy classics because fuck forgive someone has anything unusual in there fantasy setting.
Also it strikes me that people are not aware of how toweringly absurd every day life is.
Like say eggs. Eggs are boring, the word egg is used to mean a loser here in choice-bro island, eggs are incorporated in wide variety of meals what ever eggs eggs eggs.
But imagine you have reached said age that you are now with never seeing an egg or its like. Now put before this hypothetical egg-naive  you (or heny for short). What the fuck is this thing? Think about its smell , it's texture, the unusual hardness and brittleness of its outer coating, the weird viscosity of it, the transparency of the egg white , the unnatural suspension of the yolk in this uncanny medium etc. Now image "heny" asks where to these things come from? And Heny is shown these horrible dinosaur looking things more or less shitting them out of their all purpose vent , both sex organ and waste vector. And the fact that the chicken extrude these things in order to grow more chickens and even if it has no had sex, it will pop out a couple of these things each day anyway. And all this is presented to Heny as the most mundane banal of things.
Piss Pixies are nothing compared to this.


*There is possible an exception to this , but right now all the monster I think are dumb , are dumb because they are boring.

Anyway I drew pictures of the monsters and blathered on about what they are:

These are lumbering detrivores that spew forth a powerful digestive enzyme allowing them to slurp up most anything. A astonishing variety of molds, fungus, moss, and lichens sprout all over their weird humped bodies. These are symbiotic , drawing out and feeding on the wide variety of toxins, contaminates and general weirdness present in the mosshogs diet, and can be a potential concentration of the magical or chemical properties in what ever the moss hog feeds on.
It's like someone dipped up goblin in molten wax and it just made it worse. Not made out of wax, made out of flesh of disturbing viscosity. Attacks by throwing chucks of its self at you until there is enough of it on you to move your arm into stabbing you or you companions. Feed by slurping flesh straight of the bone.
The Crime bird.  Its beak is prized as a lock pick, it picks pockets, pillages houses and roosts on stolen jewellery, trading up whenever it can, the lesser stuff stashed in obscure nooks. Why is it not long dead? For one , it voids itself on its stolen goods, imparting a stink near impossible to remove, and secondly its beak, originally evolved to pluck deep borrowing rock worms, will take a eye out faster than you would believe. Lastly and most importantly ; it is a complete and utter cunning shit of a bird.﻿


I started with a blob and started scribbling on it until art happened.  It eats copper because they think they are from a future where advanced technology ruined everything, and so they attempt to destroy all copper to prevent electronics from happening. They are not actually, they are deluded wizard experiments. They have 3 personalitys, one is the pessimist, one the optimist and one the arbiter. They attack with cold waves and static fields. They are nice enough , but sticklers for proper protocol and minimizing risk. 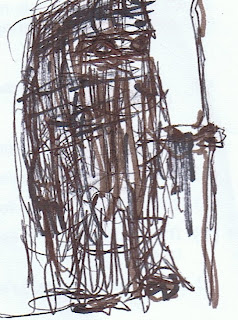 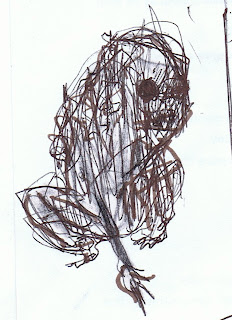 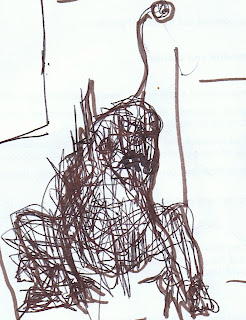 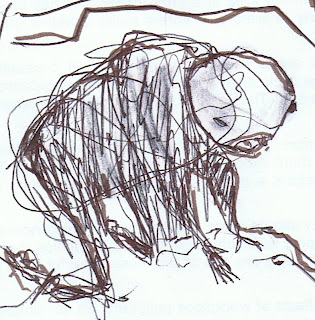 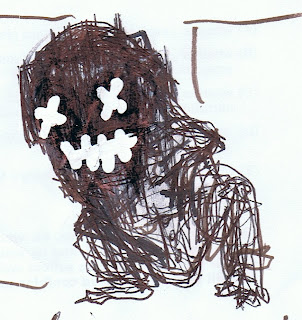 So when a colossal sky whale devours an entire city it takes awhile for the huge masses of rumble and carnage to be broken down. If you are small and good at staying out of the way, you can survive a surprisingly long time. The trash halflings are descendents of halflings who managed to do just that. By constantly cladding themselves in materials resistant to the acids of the whale they manage to survive with only a small amount of insanity ,mutations and partial melding with the trash.
They can be encountered outside the stomach of a colossal sky whale , living in the Sky Whale equivalent of "Owl pellets".  These are 6 story high spheres of tightly compressed stone and metal, that are never the less riddled with tunnels, and of course the Trash Halflings. Each Scat (as is their term for a particular tribe) varies greatly in temperament,  some being zealous cannibals , seeing their expelling from the Sky Whale as a fall from Eden. Other regard it as blessing. All scat seem to have an hard time not seeing the world around them as alien however and all seek more debris to adorn themselves with.

While certainly small, 4 limbed and mostly bipedal , the piss pixie seems named more as a horrible joke than any other resemblance to its name sake. They are appear to have something of a languid intelligence, but little drive other than sucking up sweet, vinegary or alcoholic dregs, and often fond sleeping instead a vessel used for this purpose, their form extremely rubbery and flexible.
If menaced they defend themselves by squirting forth a horrible smelling stinging yellow fluid into the eyes of the attacker, and then slither off to hide in some  unplausible gap or nook. They lack a jaw and their face resembles a prolasped anus partially dried in the sun.
There is a uncommon poison, that is odorless and tasteless,  and makes the blood of the drinker smell overwhelming attractive to the piss pixie. They will be able to smell the victim from leagues away and wait to the victim is asleep where they will latch on with their horrible snouts and suck the blood right through the skin, like a hickey of the damned. They will not stop until the victim is bleed dry.
Okay there was possible a good way of drawing a lady made from shields but I could not be assed and just drew one great big shield with dire contraptions extended out from it in all directions. I then after scanning decided the red and blue "action is happening" lines looked wack and inverted the whole thing because I'm really fond of that blue.
Shield Maidens are the "job" you are demoted to if you fuck up one too many times as a member of particular order of Knights Templar.
Your soul is trapped in a giant shield , appearing to live on as picture engraved on the shield and will animate the shield and its attached killing blades.
Shield Maidens are used for Sentinels, Body guards, and general "death trap training scenarios" for new recruits.
Despite the order being Lawful Good, Shield Maidens become Neutral Evil quite rapidly as they began hate the shit out of everything. This means that while they are bond to very letter of their orders, they use any leeway in sloppily worded orders to get revenge.
So Shield Maidens that are needed for more complicated missions such as body guarding or dealing with the general public , are those that are freshly minted.
The older and more bitter Shield Maidens are assigned to be Tomb Sentinels, Vault Guards and any other position where the orders can be simple and no-one has to put up with their dirty looks.
Note: If you can find out the exact wording of orders given to an elder Shield Maiden and can give the Shield Maiden a loophole in which to stick it to the Knights Templar, they will definitely take it, being far much interested in revenge than they are in the fleeting satisfaction of killing you.

I'm not sure what else to do with this, a glowering dripping Leviathan rising from the foul brackish depths of a hellish swamp in order to contemptuously spit ooze elementals at you is perfectly serviceable to me. Okay so the temperaments of dragons , such as avarice, sloth, rage etc. The Sludge Dragon is a paragon of draconic sloth. They do not care for anything other than sleep, and sink to the bottoms of silt choked shallow lakes and the loneliest of bogs to sleep for as long as possible. They can eat and digest near anything and when hunger rouses them just immediately devour all vegetation and animal life with in reach , gorging themselves and then submerging again
They utterly despise exertion and the only thing they despise more than this is anything that provokes them enough to bother with them. Their breathe weapon takes the form of Ooze elementals, but with an additional acid touch (H.D of ooze elemental = twice the damage dice of the Sludge Dragon) They can also effect the surface tension and viscosity of water , ooze , earth and mud, making formally solid ground act as quicksand, and make water impossible to swim in. If they can't drown or suffocate an opponent like this, they are happy to entomb them and let them starve to death

You are insane Wizard and you have an excess of enchantments , scar runes, and  magic tattoo designs. Oh and Tyrannous Rex.
Tyrannosaurus Hexes are what happens when you  use more or less laminate every square centimetre of a T-rex in magic wards. They are extremely dangerous , extremely unhappy and disrupt all magic around them in dangerously and unpredictably ways. Have you seen Holy Mountain ? This is your T-rex right here (the one not talking) THE WHOLE THING IS ON YOUTUBE WHAT ARE WAITING FOR? (watch it from the start after though. Well okay watch that scene with the Timothy Leary parody, then watch it from the start). Hmm maybe they are addicted to eating magic? Nah then it just makes them some kind of Disenchanter monster that seems to only exist to take stuff off the p.cs. Thinking...thinking..
Okay Tyrannosaurus Hex have a marauder phase where they just run around screaming at the new colours and eating people. But after that they realize they are intelligent and conscious and driven by the desire to formulate the fantastic new ways of magic  they can  just about grasp. The T-hex then attempts to study magic and experiment, as best as it can do with a wild magic field ( that it can learn to suppress) two dainty forearms , the mind of apex predator and no formal training what so ever.
Like an Outsider artist if art could blow things to pieces and turn those pieces into spider-wolves. And the artist was a giant bipedal killing machine.
Posted by scrap princess at 09:17