Patrick conjuring a umbral world that turns under the trains wheel and the insurrection arise against it, then he revealed a picture of this ugly dog


But first! The now all too familiar plug for the Deep Carbon Observatory kickstarter, now having exactly one stretch goal at 30,000 English Euros.   If reached (a mere 4000 English Euros away as of writing this post) the book will become sublimely grandiose , and will be constructed with the nigh inconceivable , as yet unprecedented, 3 RIBBONS
Minds were shattered at the beholding of Veins Of The Earths double ribbon, but here we are ADDING  ANOTHER RIBBON


Phew.
Back to this dog 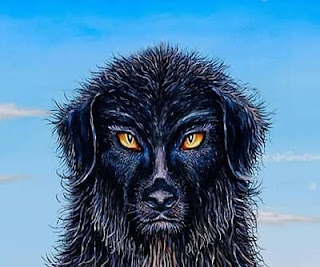 This dog obviously collects souls. In certain infernal realms politics and gambling are twisted together like the strands of a rope. This Dog was formerly a prince or sub-duke, played badly, now owes much, and has only the form of a dog.

He was walked the mortal realm for centuries now, getting owners, serving them as best a dog can, and then betraying them at the most ruinous time.

He damns souls not by temptation , as he lacks any of the customary powers and resources normally at hand to a personage le diabolique .

Instead this dog must choose his owners carefully.
Mortals of weak character but still in possession of a conscience.
Of a type that reflexively choose their own desires and needs over others , or are prone to inflict petty harms or injuries in moments of spite, envy or rage. But a type lacking the icy nerve of a blackguard or the heartlessness of a brute.
After an act of ill , this type will then begin to churn with guilt and will quickly turn to a trusted family member , mentor or companion.

To them they will seek solace, eager for vindication, reassurance or rebuke.

Thus this type will need good and firm guidance , far more than most.
They are easily lead astray but also easily kept in line too.

The Dog however will always be a source of assurance , a companion that does not judge or doubt, a instant balm for fraught nerves and lingering doubts.
His gaze is pure unconditional love, and to stroke his fur is to be instantly assured of all being right.

The results of which are ruinous in the extreme. Eventually no crime or base act becomes unconscionable to the owner , because The Dog will always be by their side, a silent validator and selfless comforter.

Then when the mortal has truly damned themselves and The Dog has grown bored , it will betray them. Revealing their possession to pursuers , distracting them from their normal security measures, uncovering hidden evidence etc.

If no subtle opportunity presents itself The Dog is more than capable of just tearing their owners throat out.

Either way the owner will find their soul now another gross fat hair writhing on the dogs coat.


So that's that dog Patrick , and now a muse-servitor for you :


BEHOLD THE RESPONSE HERE
Posted by scrap princess at 04:15

Email ThisBlogThis!Share to TwitterShare to FacebookShare to Pinterest
Labels: enabler from hell, image response ping pong, infernal, kickstarter hype campaign, soul, who can truly say that one is or is not a good boy, whose a good boy?