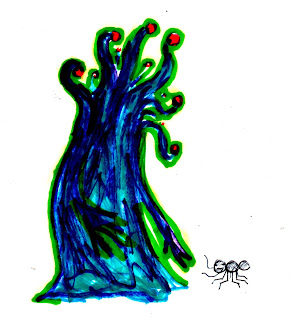 I continue to see write hooks for Velvet Horizon, using what I can find in the text and making shit up when I can't
Anemone Men:
The long dreaming polyp men with deadly soporific stings.

Hooks that are pretty much in the text already:
1.Guards: to counteract the advantage that could be had by observing their sessility and making preparations , they could be placed after a flooded tunnel connecting two rooms via pools in their corner. Thus preventing easily electrocuting , burning , smoking them out or starting combat with a volley of missile fire.
2.Their Venom as a cure for Insomnia: Either tasked or hired to find one and getting the venom , or a  character is afflicted by a magic curse of sleeplessness.
3. Looking for someone who was looking for the venom: An important npc known to suffer  from insomnia was last known to be seeking out the Anemone Men before they disappeared, possible due to getting knocked out by them and is now asleep in a damp cave somewhere.
Greatly expanded on
4. The "blue world" that surviours of the venom report dreaming of , turns out to be a pocket dimension , in which has been hidden secrets to the true nature of the world. The world is not without its guards and obfuscations though.A successful trip to the world hinges on finding and interviewing surviours of the venom to piece together a map of the blue world.
5.(wandering encounter) An Anemone Men has ripped the eyes out of some poor soul, and has approached the party seeking their aid in returning the eyes to the being who apparently survived but fled.  The eyes appear to be made entirely of precious stones with near inconceivable level of craftmanship
Original content please steal
6.A city is suffering from a sleeping plague ,where-in people sometimes fail to wake , and remain in deep dreams, seemingly in distress.  The cause is a village of Anemone Men has moved into tunnels that feed into the towns aquifer , and thus their chemicals have tainted the water.

Hooks that are pretty much in the text already:
1. Wilderness encounter: the terrain becomes increasingly ordered and geometric , leading to the nest of the ants of neutrality.

2.Collecting the ants for use as magic-suppressing device

3.Someone valuable to the party has disappeared while riding a horse ,very drunk.  The horses returning home with very very neat braids suggests  the Ants have captured said person and will soon put them to trail.

Greatly Expanded upon
4 A design for a powerful anti-chaos weapon requires Ants of Neutrality , a device somewhat like copulating of a sextant , a cannon, and a prism. The design has 2 versions. One which the ants antennas are mashed to a pulp and boiled down to crystallize. The weapon shines the light of order through the crystal which acts as lens. This is the lesser version. The greater version involves having an entire nest peacefully living inside the machine. But this requires obtaining a nest and transporting it without stressing the Ants by exposing them to chaotic engine, or they won't survive the trip.

Original Content please steal:
5.A powerful chaotic force is contained behind a vast vault door, with some of the locking mechanism by the presence of a hive of Neutral ants. However recent events in the city have exposed them to a form of chaotic engine the terms of their contract don't cover. So they are claiming breach of contract and will be leaving soon, resulting in the vaults integrity being compromised

6.The Ants of Neutrality, a minor nuisance of the Mute-Chalk Plains, are freaking out like the proverbial canary in the goldmine,  suggesting a vast chaotic event is nigh.  By comparing the degree of freaking out the direction of said event can be determined , and thus giving the first clue.