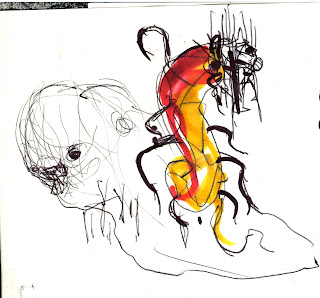 The post kickstarting doings are being done at a steady pace , the country is beginning to ease the social restrictions , and I have for you a new blog post series that will hopefully keep things regular around here.

This new series entails my favourite  (un)dead horse , Fire On The Velvet Horizon and giving you hooks for using all the monsters.


But before that , a quick note about the process of the book:
I gathered a range of art I had done, in a broad of a way as I could manage, including finished pieces with barely started, pieces I loved, and pieces I was embarrassed by . Patrick then respond to the ones he responded to, and sent me the writing, which I might accept, suggest changes or additions, and  in a couple of times reject.
One of the desired outcomes of the text , to which I made suggestions in aid of , was that there would be obvious hooks on how to use the monster.

So this series will also mean I will revisit that goal  and see how well it accomplished it.
I will note which hooks , to me, seemed easy to draw from the text , and which ones I'm in fresh territory.


ABHORRER
The slug that uses civic law as its invincible shield

Hooks that are pretty much in the text already:
1. The Abhorrer has purchased an enslaved genius , the only one capable of solving the vast hyperdimensional locks protecting the vaults of the treasure moons. The Abhorrer will have them counting sand until their wits fail them.

2.The party reaches a city of renown for its wisdom and love of justice in order to seek the aid of their armies. However an Abhorrer has twisted its way into the courts of the city , and has snared up the courts with endless petty cases. Its poisonous presence hasn't yet sunk the cities leaders into apathetic cynicism, but each passing days is a drop of corrosion on their vigor and virtue.

3.To rid itself of an Abhorrer , a city has collapsed into sheer bloody anarchy , the courts aflame , open warfare between a dozen or more factions filling the streets. However the Abhorrer has hidden itself , like an encysted parasite in rotten flesh. The party is tasked to find it and kill it, at risk from rioters,overly zealous military, or any number of factions liable to mistake them for their rivals.

4. Another city seeks the path of law to rid an Abhorrer. While the Abhorrer is physically protected by law, and evidence of its wrong doing inaccessible through legal means, its powers won't be able to protect that evidence from extra-legal means, i.e the party. The relevant civil authoritys can't be official connected to the party or be shown to have directly  hired them , but through use of catspaws, anonymous drops, and arranged  "accidents" the parties services can be directed and rewarded.

Original material please steal:
5.  In a sinking city, one whose new buildings lay foundation on the roofs of old, a vast case against an Abhorrer is being made.  Ancient books of law must be obtained from ancient archives deep down in the old city. Among the dangers of mammoth book lice, guardians demented with age, and demi-real book beings,Abhorrer hired mercenary,  are the undead librarians zealously punishing anyone breaking the silence.  Also for your Library megadungeon needs

6. A small frontier town begins to be able to pay adventurers/the party to clear out monster lairs, establish trails and merchant routes, etc. The Burgomaster funding it is actually a front for Abhorrer  , keen to have a metropolis grown up around it.

Weird beings from a microworld. Masked , social and flanged.

pretty much in the text
1. An Aeskithete curator , buys art and books , pays with unusual materials  .

Hooks in the text , greatly expanded upon
2 . A vast and ruinous war might be coming to an end, if a facilitator of impeccable ability and complete neutrality can found. To that end , the party will be offered a significant reward to be magicked to the microworld of the Aeskithetes, brave the dangers there, and convince an Aeskithete to abandon its peers, and its entire generation in order to secure a lasting peace.

3. The true heir to a throne was absconded by usurpers. While the usurpers have been ousted , the heir is still missing, and it is unlikely stability can be found without them. An investigation of the possessions of the former usurpers points towards the incredibly impossibility of the heir being trapped on their own skin. Aeskithetes must be found and recruited to allow such a impossible journey.. Note that some contrivance must be order to allow the heir to still be alive, despite time passing quicker in the micro world. The heir might now be ruling a new kingdom or have sired a dynasty.

Original material please steal:
4 World destroying events are a foot  .Meteors, vast artifacts falling from the  sky, unpredictable changes in the atmosphere. A mad solution is advanced. Find the magics that allow the Aeskithetes to expand into (for them) the marcoworld  and use them to ascend up to the marcomarcoworld and adjust the events directly

5. Books sculpted from keratin indicate the presence of Aeskithete library.  One is a catalog and it lists many otherwise lost tomes of civilization altering knowledge. The colour of the keratin is distinctive and if one  can find the being whose hair matches this colour, then one can likely find this library.

6.A character is struck by magically irrevocable wound or disease. But! Help shows up in an Aeskithete from the characters very skin, their civilization foreseeing the end , sending one of their own to bring their host unto the hosts very skin and do battle with the source of infection directly!