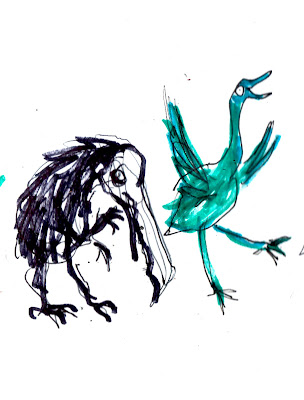 It continues!
Also this book has a lot of birds in it, I'm not sure if it was because I happened to have included a disproportionate amount of birds in the images I gave Patrick , or if its because the birds that were in it were very personable.
Regardless , here's 2 more of them .

Bedlam Birds
Horrible skull headed malevolences , possessed a fiendish cunning, excellent mimicry and an inexplicable ability to always know if they are watched. Everybody hates  them

Hooks that are pretty much in the text already
1.An isolated settlers cabin, barricaded , parents insane* , their kids trying their best to tend to them.  The kids will let the players in to help , but only if they can see them (they've learned to never trust only what they can hear). They will describe laughing long skulls in the dark and beg the party to save them from them.
2. A village will enlist the party to hunt down some graverobbing, church desecrating, cultists. It's actually a Malignity** of Bedlam Birds
3.(hex filling/encounter) Two bands of long feuding armies are seen working closely together  , searching for the Bedlam Birds that have bedeviled them both. However Bedlam Birds are staying just out of reach and each night will mimic the voices of each , crudely trying to manipulate them to turn on each other
4.A search mission the players are on can be exacerbated by Bedlam Birds following them and mimicking the voices of whoever the party is looking for
Original Content Please Use
5.The ability of Bedlam Birds to always know when they are being watching , is tantalizingly potent ability. Alas as the Bedlam Bird will never co-operate , it is effectively useless for anyone else. However a Wizard and talented Psilord has attempting to isolate the ability , and will pay vast sums of money to anyone who can bring them to him alive.
6.So that Psilord? He was trying to turn Bedlam Birds into a fleshy tube with the bare minimum of brain and an eyeball that would blink when spyed upon. In his attempt to do so something went very very wrong and no further communications have come from his tower. So there's a whole tower of value just sitting there now , with nothing but it's wards, two dozen Bedlams Birds, a bunch of things that used to be Bedlams Birds, other lab experiments, and whatever happened to the Psilord and his apprentices.

* the book doesn't give a duration of the insanity, but let's assume healing magics or abilities of level 3 or higher can cure it.
** the collective noun

The Blathering Bird
A bird that would be renowned for its powers of retention and recall, if it wasn't even more well known for never shutting up .

Hooks that are pretty much in the text already
1. (hex filler/encounter) a Blathering Bird on route between one settlement to another. Useful in the sense that it can lead you to the next settlement and give you news about the last one, less usefully in the sense it will never shut up and attract additionally encounters.
Expanded upon greatly
2.The most obvious one is to have the Blathering Bird know something the party wants to know. The way to make getting that information interesting  is to require the Blathering Bird to have its memory "jogged" . I.e physically escorting it through the series of locations and events that lead to it getting the information desired in the first place.

3.A prison has Blathering Birds kept in cages above the prisoners communal area, as form of torture, surveillance, and mental disruption. At the end of the day the Blathering Birds are moved to a communal cage . There they are looked after by individuals saint like in their patience, who record in short hand anything new the Birds have learned, before committing it in longhand  for the overseers of the prison. But this routine has been disrupted by the sudden murder of one the Bird-tenders and the theft of his log book from his home (off site from the prison). The Crown Jewels had been stolen a month previous to this event, could one of the thieves involved be currently serving time for a unrelated crime? Does one of the Birds know? How do you go about finding the one Bird that does know?
Original Content Please Use
4. Villages spread out along dusty badlands that use Blathering Birds as a way of keeping up to date have send notice to royal authority that Birds are coming back to their village , completely unwillingly to talk about what they've seen. The location and timing of the reports is suggestive of something moving towards more populated areas. There are now concerns.

5.Blathering Birds are actually good defenses against some forms of telepathy, as their brains are the equivalent of very loud white noise generator

6.A technique has been developed to store information in Blathering Birds and have it not recalled until the correct conditions are met.
The  technique involves subjecting the Blathering Birds to a very bright, very loud , very sudden piece of theatre. The piece must around 3 minutes in length and cannot be mere chaos, it must have characters, plots, character arcs, and a resolution, all while using unique music and costumes.
At the exact middle of this , everything is stopped, and the information is clearly stated  to the Blathering Bird. Then the piece continues til its resolution. The Bird will be so overwhelmed , so interested in everything , it won't be able to know which bit to talk about first, and it will immediately have a fit. Once it has recovered from the fit it will have formed a "mnemonic cyst" around the information. It will be unable to recall any of it , unless its exposed to the exact same piece of theatre again, in which case it will blurt out the information at the half way mark.