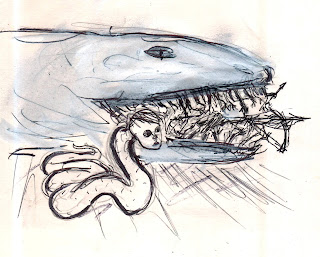 More Velvet Hooks.
This series will be interspersed with other post topics but right now I don't have anything worth doing a full post on.
Also? , I'm no longer going to bother trying to label the hooks as "expanded content/original content" , as it seems arbitrary and not useful to try and divide them like that.
I'll keep the "pretty much in the text" one though.
Boa Boy:
The head of a child, the body of a snake, a simple abdead* servant . What could go wrong?
1.Boa boys are used as guards in well off houses. But where to put them? Lurking in vases , like the snake charmers money maker? One option is a fake safe, maybe being obviously hidden behind a large painting. Such a safe has boa access at the back . So when the safe is opened by intruder , the boa boy is waiting to pull them in , with the door engineered to swing shut afterwards
2. Eccentric Aristocrat with dozens of Boa boys holding up his train. He often needs to replace them , as he's prone to make wagers about his ability to shoot a glass of sherry balanced atop the head of one of his unfortunate boa boys.
He prefers Boa boys with eyes that aren't quite blue or green.
3. A Boa Boy of rare intelligence and an insatiable desire for vengeance. It murdered its first owner, making it seem like an accident. From there it moved on to another house, replacing the  Boa Boy on staff there . The "replacing" involves the current Boa Boy being set free, enlisted to  help, or if they prove too loyal  ,being killed and disposed of.
4. A isolated mansion with its owner succumbing to an heart attack. The Boa Boy staff are a particular witless example, and keep the mansion running as if the owner was still alive, rather than mummified in the tea room.
5. Certain Boa Boy are made and  sold off , but with a certain magick in their creation, sneak out at night to report back to their creator, who is slowly building up quite the blackmail portfolio,

6. Someone has let loose an illness as to have more dead children , as the poor often sell bodies they can't afford to have appropriately disposed of . The engineer of the blight doesn't need the resulting Boa Boys, they are just the byproduct of an extensive study in which the line between undead and abdead is to be understood.
*"abdead" using the term from China Miéville here as to define an animated corpse that isn't powered by necrotic energies , instead magic is used to restart and maintain its biologys.
Boa Constructor:
A vast snake with a maw full of clever hands. Makes itself a very important figure via trade and specialized construction, as to provide for its vast appetite
Encounters with Young Forms  (and pretty much in the text already)
1. Xanthic Snake: A series of brutal forest traps designed to isolate and maim , so allowing the Xanthic to gorge easily.
2.  Pavonated Snake :As above but instead of maiming, the trapped are then engaged in attempts at conversations and attempts at bargaining.
Griseous and older , expanded upon:
3 A mysterious shop sells strange and complex weaponry.   Examples are a thing like a elongated zither that will snap one of its metal strings like a bull whip, or one which resembles the fiendish child of a sextant and a scythe that will launch sharpened discs slicing through the air. Each weapon requires unique ammunition and this shop is the only place where these can be found.
4 In the treasure horde of some fabled beast lies a suit of armour. Constructed of starmetals, dragonbone, and the rarest of nights gold, it however is currently ripped nearly asunder. The construction of the armour is such that only by finding the original creator could there be any hope of seeing it repaired and modified to fit another. Spoiler Alert :  The creator is a giant snake with arms for teeth : o
5 Have a major villain or obstacle to the pc have custom armour, but if you can find the snake and bribe it , you will learn its weaknesses, Snake in question has "retired"  , having reached its maximum size and build a palace for itself.
6 Final Form of a Boa Constructor : so when they reach their maximum size a Boa Constructor will retire to its elaborate custom made palace. However this palace is actually a  womb  , factory and massive egg. It will slowly dismantle the Boa Constructor  painstakingly peeling nerves from muscles, etc, and then interlace the nerves unto a new massive frame of rubber, silk , steel , and wax.
The muscles are then attached to an engineering nightmare of levers, cogs, pulleys, and chains.
After an entire century the palace egg will hatch, revealing a Boa constructor the size of a castle and more mechanics than snake. Its frail flesh now spread like a fine web through out its bespoke colossus.
This Boa Constructor Omega will find an city that has is the right mix of vulnerability and viable potential. One that's relatively easy to take over ,  but still has the potential to  become a cultural mecca with a giant robotic snake running it.
This final form is less interested in food as it is knowledge, any city it runs will soon become renowned* for its libraries and universities
*I mean the MechaBoaConstructor overlord will likely be the first thing mentioned in conversation but the next thing is going to be the libraries and universities
Posted by scrap princess at 06:42