Sorry it's been awhile , a lot of life admin and big slog projects, and nothing to announce yet.

And you only get another one of the Velvet Hooks series! Such a cruel fate dripple! 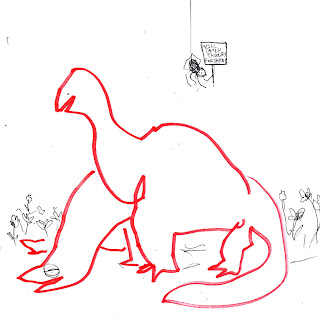 A polyheaded reptile beast, crippled and deluded by its diet of poppy fields, that speaks of ancient and potent knowledge.  What it could be if not addicted , is equally unknowable to the amount of truth in its stories.

1.The original species , capable of chameleon powers . If not as a living beast, as the origin for a magical cloak or armour. (pretty much in the text)

2. Turns out her stories where true! A chunk of her flesh, was taken and resurrected and raised on a diet free of opiates,, this grew a terrible lizard king with vast psychic powers. Potentially the only thing capable of standing up to its powers is the original crimson contraodron , if it can be rehabilitated and motivated.

3.She has eaten some wise figure, and the knowledge of said figure must be deduced before it gets too muddled with its other thoughts. (pretty much in the text)

4. Her memory of the old world allows the location of the bones of great and potent beasts.

5. She can speak the language of the elements when they were people,

6. It's most obviously a location based beast, but potentially other species of psychoactive flower could have an equally entrenched Contrarodron, such as Datura or Morning Glory.

A intelligent spider whose webs catch thoughts that would otherwise be lost.

1.One has formed a partnership with non-human thinker, non-human thoughts have potential to reshape the human mind into one capable of new insights or holding alien perspectives.

2.As a hex encounter, the spider approaching the party and trying to convince them of its value.

3. A town or city that use these spiders as a justice system. By feeding the guilty the lingering pains of their victims, they hope to create empathy or at the very least appropriate punishment.

4. Artists murdering each other over thought theft via spider

5.Thought fishers, people who maintain a relationship with a spider, and offer 10 secrets for a gold coin. `

6. A cocoon is found amongst the protected wealth of someone. Somehow this cocoons contents are known and valuable enough that it has become a unit of trade, worth equal of jewels and rare metals.