So speaking of Geas/quest spells, ergot!
I'm reading about fungus at the moment, and I thought I'd share some excitement from this learning.
Ergot is a type of fungus. It grows on wheat, and instead of the wheat producing it's normal grain, it produces a black fruiting body of the fungus. One of the chemicals produced by ergot is what was later synthesized and lead to the creation of lsd. There is fairly strong evidence that the europe witch burning craze and the classic salem one's was caused by people tripping the fuck out on ergot growing on their wheat. Unusually cold springs preceded the witch burnings, and were apparently great for the fungus to grow. The fact that adolescents were most reported to be affected by witchy curses as well a as cattle failing to produce milk (adolescents being most sensitive to toxic alkaloids)    and other domestic animals acting strange and occuasionally losing limbs to dry gangrene, are all symptoms of ergot poisoning.
People bewitched described sensations including feelings of ants running over the skin (formication), facial distortion, paralysis , hallucinations, convulsive  seizures and dementia, all these consistent with ergot poisoning.
Okay you all knew that right?
But what the cover sleeves of Big Black albums don't tell you is another kind of ergot poisoning, because ergot has a whole range of alkaloids, and one of those, ergotamine is a powerful vaso-constrictor to completely restrict blood flow to some parts of the body causing  gangrenous ergotism. Sometimes it merely cause loss of nails, sometimes hands , feet or whole limbs.
Which dry up, turn black and fall off with no pain or bleeding, but with a overwhelming stink.

Feelings of intense heat of precede the weeks before your whole fucking arm drops off, thus making medieval people refer to this horror as a "plague of fire" or "holy fire" and later "st anthonys fire"(also there's another st anthonys disease which is a bacterial infection that makes red, swollen and sore covered)
Depictions of followers of St Anthony are often depicted with burning or missing limbs.

Thought that was all horrible and thought I should share. The Irish had only one case of witch burning and no ergot poisoning reports because they all ate potatos instead of rye. This is possibly the only lucky break Ireland has had in its entire history and the whole potato eating thing didn't work out so good either. 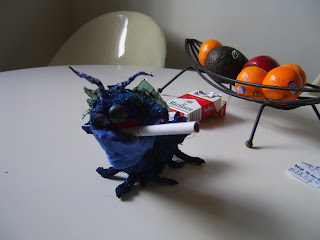 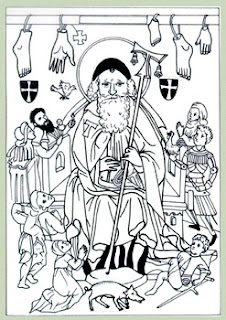