THE WORLD HAS ENDED: wraith archetype


look like dead  person, either coz they are pale and horrible looking or actually have a chunk of their head missing, or are still smoking or what have you. You are physically there though.  You can heal a number of wounds = to your will power each hour. Regular diseases and poisons do not effect you, but super diseases and super poisons do. 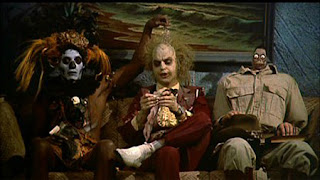 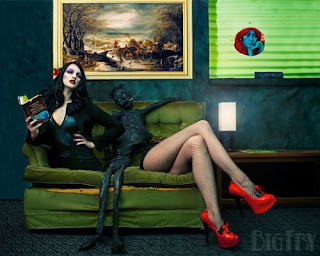 You suffer your first point of impairment at 31 and your 2nd at 35.

MAke death checks at 40
if fail death check may reduce choice to reduce stats by an amount = to the amount you failed the check, to go into a insubstial ghost cloud and flee back to you crypt where you can grow a new body.  It costs less to buy your stats back with exp than it usually would, but they still wouldn't come back any other way.
Choose 3 powers:

Inner void:
you body has cracks in and a pure darkness snarling at the light seeps out. Anyone attempting to directly infect your mind takes an attack using your power score, damage is = to their int, and is not reduced by constitution. In addition if you fail a death check your body implodes sucking the light and life of all around you, everyone with 20 metres takes 5 wounds.


Fear:
You can radiate intense doom to a number of people within sight range = to your intelligence. Those targets must make a will check. Failure means they suffer impairment = the failed outcome on any attacks directed at you. They may make a new will check each round.


Object reading:
you with a touch sense an objects history , and any charged emotional events that have happened involving it.


Ruin:
You send out a wave of pure malignancy, directed at an objects it twists and breaks them, against the living minor hemtomas burst all over the skin , bones creak and organs quail. Anything that can go wrong does go wrong. It's a Powers attack delivering your will+int damage . In additional the to taking damage the target cannot use any fortune dice on their next action.

Cold blast:
A shrieking wind of utter cold. Resolved as a Powers attack and does int+4 damage. If you get it more than once increase the damage to int+6

Flight:
you can fly like a dirty sheet in the winds of its design. Your speed is swift with your flight, and you can use your powers score to dodge attacks instead of you Dodge score. Purchasing this power choice more than once increase the speed category by one each time .

Ghost door
Connect to portal together with your spooky magic. Both doors must be with sight of you, or with a successfully int check within intX10 metres. Anyone going through one door winds up coming out the other. Effect lasts until you activate another wraith power or fail a death check.

Shadow strike:
You can strike at someones shadow, hurting them as though you had stabbed their for real flesh. This needs to have shadows present (so nolighting from all angles or pitch darkness) and if it's not obvious where there shadow would be, make a fortune check for it to be near you. You can only do physical attacks with your body through the shadow, and you use your int as a damage modifier instead of str+weapon. If your opponent is unaware of this vector of attack, you use their reflexes as a defensive action trait instead of Violence or Dodge. Once they are wise to it, they can Dodge but at -2 to there Dodge value.

Blink
when you activate this you flit in and out of existence. anytime you are attacked roll a d4 , on 4 you blink out of existence and reappear 1d12 metres from your current place in a random direction. This more than likely means the attack misses. Every 3rd round of using this power you must make a make a fortune check. Failure means you blink somewhere that puts you in line of a random attack or out of reach for your own attack or in the middle of an environmental hazard.

Soul searing gaze:
You attack a senteint being with a gaze attack. They must be vaguely facing you. It wracks them with inner torment, and counts as a Powers attack doing Cha+2 damage. Only a Powers score can be used as defense.

banshee wail:
You can only use this power every 4 rounds. Everyone within earshot must make death check. If there wounds are below 35 (or the number they use to start having death checks) then its a death check vs a negative number, so if they have 0 wounds, they would have to make a con roll againest -35. So you would feel real dumb if you fucked that up. Anyone who fails the deathcheck starts dying as per standard rules

Secrets from BEYOND:Choose one effect from a sorcery port folio to have as a power.
Posted by scrap princess at 03:33

Email ThisBlogThis!Share to TwitterShare to FacebookShare to Pinterest
Labels: sasshammer, the world has ended