An overdose happens if this roll reaches 12 + their con modifier.

Assume 6 hours for the duration of any effects if not otherwise mentioned. For spell effects assume level 4 for purposes of duration.`

Some drugs when you reach a certain die rolling threshold , after which you are addicted. If you stop taking the drug you suffer withdrawal effects.
Here is some magic drugs:

FLUME: the vapours, sweet mist, broil
a thick paste that is heated in bowls and then resulting bowl trapped vapour is inhaled. The paste is microorganism invested volcanic mud. OR mudman essence depending on your levels of fake science.

General effects are warm pleasant feeling and languidness, relaxing both mentally and musclelly. Like a big cup of lemon ginger , tiger balm and codeine.
OTher effects:
1. Smoke gentle puffs out of ears, drench in sweat, will need to drink 4 times as much water
2.Overheat and pass out for 1d4 hours
3.Resist cold (as the spell)
4.Heal 1d6+1 hitpoints
5.Counts as if had a nights rest.
6.Skin gets very soft and tender. Armour or even clothing is very uncomfortable, like -2 to all actions uncomfortable.
7.Patches of hair fall out
8. Temporarily lose of 2d6 points of dexterity for 2 days.
9+ character chooses any of the above , overdose on 12+ con modifer

Addiction for flume happens when they start rolling d8s.
Withdrawal means anything less than sauna temperatures effects them as freezing weather.
Lasts a week.

Overdose: gradual internal combustion , you take 1d6 each round for an hour unless submerged in freezing water. Also con save or lose 1d4 points of dexterity.

Long heavy use include excessive sweating, bloatness and hairloss.

. ANGELSHIT, angleshit, distal, stretcher
General effects include time dilation, alertness, sharpened spatial awareness.
Commonly taken as tiny black beads that are held under the tongue, like a ball bearing of frozen oil.
Its obtained by collecting and  refining the dark dew found on spider webs near the throughfares of night-guants.

1. VOmiting. Character spends the next couple of hours throwing up.
2.They may reroll any wisdom or intelligence check made in the next 5 hours.
3.Regain the use of a spell to do with perception or travelling
4.+2 to any rolls to do with balancing or climbing
5.Deeply unsettled (shaken) by corners
6.They can fold something into a space smaller than itself. You will need to use angelshit again to get it out again.
7. Loss of all motor control
8.Lose 1d6 of their valued items. They are now in bizarre hard to reach (yet nearby) locations
9.All objects of a randomly determined colour are displaced to them, as the spell.
10.They know the exact location of one object of your choice
11.Truesight as the spell, but looking at certain geometric shapes causes 1d6 damage                      (1.triangle 2 .rectangles    3. circles. 4. squares)
12+Character chooses one effect from the above.
Also overdose if the roll is 12+con modifier

Overdose : as the maze spell but they are lost in your immediate environment somehow, angles and common distances  turn on them becoming impossible chasms and fractally tense thickets. No-one else will be able to see or interact with you , other than extremely brief glimpses out of the corner of their eyes. They will be trapped like this for a number of hours = 10 modified by the results of an intelligence check (so if they succeed by 6 they are trapped for 4 hours, if they  fail by 2 they will be trapped by 12 hours etc)
Edit: I forget to mention if you roll a 20 on this intelligence check the duration is in years. 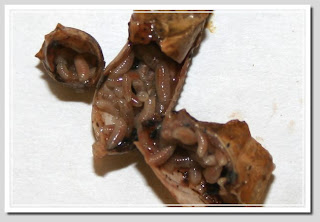 Made by from the liquified contents of foot long butterfly cocoon that has been infested with parasite wasp eggs. Made into a green paste and rubbed onto the gums.
Heavy long term use include weird coloured bruising all over the body, constant minor hallucinations, and a weird chemical smell.


Specific effects:
1. 1d8+1(temporary) bonus hitpoints
2.Do not feel pain
3.formication prevents concentration will scratch self to bleeding
4.Hallucinate bugs everywhere
5.do not fear
6.+1 str/dex for 1d4 hours
7.Crave inorganic substances as food, like coal, dirt, tar, or sulphar. Will save to resist immediately eating .them if available
8.They may reroll any perception or awareness checks
9.random bug parts grow out of them. This is permanent
10+ character can pick one of the above, also overdose on 12+ con modifer

You are addicted when you start rolling d8s on  this table.
Withdrawal is maddening formication , insomnia , hear constant buzzing noises. If not restrained will inflict damage  on self each day from scratching and trying to cut out insects believe to be inside body. Each day of withdrawal character attempts a will save . IF they fail they take 1d8 damage per failed will save .Like if you have failed 4 you take 4d8 damage when you fail one. Withdrawal lasts a week.

Overdose:
Your organs sprout legs and try and climb out of you. Save or die.

Specific effects:
1. Total retention of anything read
2.Become completely absorbed in nothing. Will save to respond to anything
3.Perfect recall of past events
4.Delusion that they can understand all languages include those of animals
5. As above but you really do understand one of those languages.
6.Can memorize a spell one level higher than usual. Int check to cast without mishap
7.minor telepathy, nearby surface thoughts heard.
8.will mistake a written word for the thing it describes
9.gain a random nearby persons memory as your own
10+character chooses one of the above, overdose on 12+ con modifer.

Very addictive, addicted as soon as character starts rolling d6s on the table.
Withdrawal: insomnia, agitation, will save or will obey a spoken or written instruction. Lasts a week.

Overdose:
character  will do nothing other than start saying every word they know and as they say them , they forget them. Will lose fluency in a spoken language in hour unless gagged. Also save or lose 2d6 intelligence.